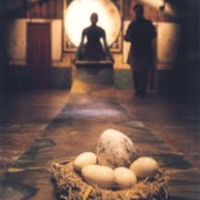 The Teatro delle Briciole appeared in a region that had a centuries-old tradition of puppets. Naturally, by the end of the 20th century the approach to puppets and the techniques of this type of theatre no longer had much to do with the old world of Emilian glove-puppeteers. The stock characters of the stuff and dialect of the region had disappeared; on the other hand another type of awareness, common to other great companies of the period, was emerging in which glove puppets and marionettes (string puppets) could respond to a simple theatrical need to represent something and to represent themselves.

From the start, the Teatro delle Briciole felt the need when making theatre to maintain a sense of distance between the actor and the object allowing the audience to recognize the latter as an actor.

This occurred from the very first production, Il Piccolo Principe (The Little Prince) by Antoine de Saint-Exupéry, and then in Nemo (1979), which corresponded with the move of the company from Reggio Emilia to Parma, and also with the transition to the theme of the relationship between big and little, and to an affirmation of the physical and vocal presence of the actor on the stage. From a “micro-theatre” using tiny objects was born a new relationship between the actor and the object, but also between the audiences and the theatrical space as the spaces began to shrink whilst actors, objects and audiences became one. As the space in which the actors perform became circular, this symbiotic link became more intense and engrossing. Shows such as Genesi (Genesis, based on the Bible), Kamillo Kromo (based on Francesco Tullio Altan’s drawings) L’Accalappiatopi (The Rat-catcher, inspired by the work of Marina Tsvetaeva) continued this attempt to create an ever-increasing distanciation of the actor as well as a growing involvement of the audience.

In this way by the 1990s they arrived at a complex project, the “Progetto Odissea”, which gave birth to large shows involving collaboration with other theatres such as the Massalia theatre of Marseille. Polifemo (Polyphemus) opened at the Teatro Regio of Parma with the participation of forty children aged between seven and fourteen.

This was followed by a study that was almost a deconstruction of Pinocchio creating both a production and a project, La materia e il suo doppio (Material and its Double), which became the basic field of research for the authors of the Briciole.

The Teatro delle Briciole has carried off numerous prestigious prizes and continues its activities in Parma at the Teatro al Parco.