Gong Theatre for Children and Youth 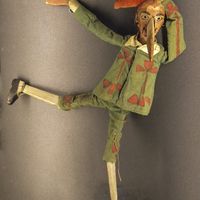 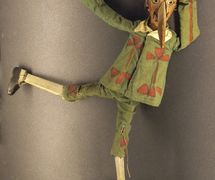 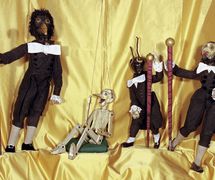 There are characters from children’s literature that have become universal because they exemplify worth and meaning that go beyond the youthful context for which they were created; among these Pinocchio deserves a special place. In fact, this character has become emblematic, embodying better than any other the metamorphosis of a puppet into a human being.

The tale was recounted in 1881 in a pamphlet published in Il Giornale per i bambini (The Children’s Newspaper) by Carlo Lorenzini, called Collodi, a playwright and journalist who was also responsible for some censorship within this publication for children. A poor woodworker, Mastro (Master) Geppetto (a diminutive of Joseph, carpenter and celibate father par excellence), has the idea to sculpt a moving marionette puppet and to take it along his routes to make his fortune. From his colleague Mastro Antonio (called Cherry because of his red nose) he receives a wood log that the latter was unable to work. Indeed, this block of wood presents strange characteristics from the start.

Master Geppetto begins to fashion his piece of wood, giving it the appearance of a child. But the moment it is finished, the puppet begins to misbehave, stealing Geppetto’s wig and sticking out his tongue at him. The puppet is ready to confront life. Marvelling at the extraordinary abilities of his Pinocchio to speak and walk, Geppetto decides to send him to school, making sacrifices on his behalf as if for his own child. Thus begins the series of misadventures that will carry Pinocchio from one encounter to the next, until he meets a young girl with turquoise hair: a magical figure, part fairy, part mother or sister, who sometimes takes care of him and protects him and sometimes punishes him.

Originally, the story was to have ended at Chapter XV: Pinocchio, chased by the bandits, seeks refuge in a cabin in the woods where the blue-haired fairy tells him that everyone is dead and no one can help him. The bandits hang him from an oak tree; Pinocchio turns back into the block of wood he was at the beginning of the story. This conclusion inserts itself into the vein of ordinary cruelty in children’s fables (ogres devouring small children, unworthy parents, wicked stepmothers …). Pinocchio’s death is, however, symbolic; it constitutes a prelude to a rebirth, in an initiatory journey that has at its end the search for knowledge and human attributes. In fact, Collodi’s editor and his young readers demanded that Pinocchio’s death not signal the end of the puppet’s adventures. Collodi took up the character again, and over the course of new ordeals we find Pinocchio once more on the trail of his father Geppetto, who, for his part despairing at the idea of never seeing Pinocchio again, has departed across the ocean toward America. It is at this point in the narrative that we encounter the shark (Italian: Il terribile Pescecane, a mile-long, five-storey-high fish), in whose belly Geppetto and Pinocchio are reunited. The puppet is, in the end, transformed into a real boy of flesh and blood; the metamorphosis is complete.

The Character in Modernity

It may seem strange that in this moment of hyper-technological culture, far from the cultural moment of the 19th century in which Pinocchio was born, the most famous puppet in literature has not been forgotten but remains a source of inspiration for a number of artists. He has inspired filmmakers from Walt Disney in 1940, to Luigi Comencini in 1972, to Roberto Benigni in 1999 – and let us not forget Steven Spielberg, whose protagonist in Artificial Intelligence (2001), a child-robot who wants to become human, is clearly a reference to Collodi’s character. Theatrical adaptations include Carmelo Bene’s Pinocchio (1980); the dreamlike and magical version by Tonino Conte (1996) with scenery and costumes created by Lele Luzzati for the Teatro della Tosse in Genoa; or Pinocchio, storia di un burattino (Pinocchio, A Puppet’s Tale) at the Piccolo Teatro in Milan, directed by Stefano de Luca (1997), which fully demonstrates the imprecise and mysterious dimension, the incomplete aspect of the puppet constructed by old Geppetto.

More recently, Pinocchio nero (Black Pinocchio, 2004) by Marco Balianin, with the Teatro delle Briciole, was staged with twenty youths from Nairobi. Living in the great landfills in the slums of the Kenyan capital and referred to as chokora (meaning garbage), these children became the protagonists of a story; for the space of one uncommon theatrical creation, they reclaimed their dignity as mindful human beings, thus closely embodying the arc of the Pinocchio narrative (see Society and Puppets – Social Applications of Puppetry). Revisiting the tale, Jean Cagnard composed Bout de bois (Block of Wood), which La Compagnie Arketal Cannes staged in 2004 in the form of a journey from “box-island” to “box-island” – that is, several small theatres and landscape paintings that opened onto each of the puppet’s adventures. Even in China, the China Puppet Art Troupe (Zhongguo Muou Yishutuan) has added Pinocchio to its repertoire. Finally, the literary and psychoanalytic interpretations of the Pinocchio theme are numerous; see for example Giorgio Manganelli, Pinocchio: un libro parallelo (Pinocchio: A Parallel Book, 1977).

Pinocchio’s voyage is emblematic of a search for identity, but also draws together a number of elements that belong to that troubled boundary between the inanimate and the human, a boundary that can be breached by crossing a path sown with deaths, rebirths, and metamorphoses. At what moment does the block of wood, the burattino, join the ranks of human beings? When does he learn to obey laws and social codes? When does he reunite with his father Geppetto? And does he recognize his origin and his identity through the acknowledgment of this filial bond? And when, finally, does he become aware of death? These are perhaps the questions that have been and are still responsible for the puppet’s popularity. This children’s fable in fact raises the question of the boundaries of what defines the human, a theme that has reclaimed all its importance in the present day.