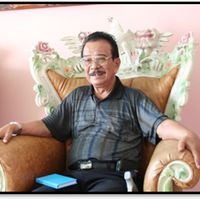 Indonesian puppet master (dalang) of Sundanese wayang golek (rod puppet) tradition of Sunda (West Java). Of aristocratic heritage, Tjetjep (also spelt Cecep) became involved in the anti-colonial struggle in his youth. After independence he finished Teachers College and became a teacher, then a principal of a primary school in Karawang from 1954 though the 1960s. Though not of dalang heritage, he loved wayang and immersed himself in wayang literature, becoming a dalang in 1967. By 1974, he won the Binojakrama dalang contest in West Java. Associated with Golkar, the political party of President Suharto’s New Order, Dalang Tjetjep implemented government training for dalang, encouraging them to continue tradition and use wayang to support government programmes.

Noted for his narrative skill, Ki Tjetjep (Ki is an epithet of respect accorded to a senior dalang) made over a hundred cassettes of wayang stories which were purchased and studied by other Sundanese dalang including Ki Asep Sunandar Sunarya. His wife, pesinden (female singer) Ijah Hadijah, became an international sensation with the album Tonggeret (1987), which featured Kawarang style female singing in the new jaipongan style (a dance-music craze of the 1980s-1990s); his wife often became a greater draw for audience than his puppetry.

Ki Tjetjep counts ten dalang students, including his son Eka Cecep Supriadi. He is a significant figure in Indonesian dalang associations, including PEPADI (Persatuan Dalang Indonesia, Indonesian Union of Dalang), SENAWANGI (Sekretariat Nasional Wayang Indonesia, National Secretariat of Wayang Indonesia), and West Java’s Yayasan Padalangan (Dalang Foundation). He created lively, new stories, such as Nur Kala Kalidasa (named after the ogre king who is a manifestation of the god-clown Semar), which were adopted by other dalang. Ki Tjetjep Supriadi has won the Art award from the Indonesian Minister of Culture and other honours.