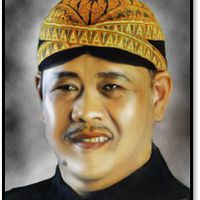 Indonesian puppet master (dalang) of the Sundanese wayang golek (rod puppet) tradition of West Java. Asep Sunandar Sunarya’s work appears on national television and he has toured nationally and internationally (Ki is an epithet of respect accorded to a senior dalang). He is a grandson of Dalang Johari active in the 1920s-1940s and son of Dalang Abah Sunarya who was the most popular dalang in the l950s-1970s. He was the thirteenth son of his mother, Cucun Jubaedah; other dalang among her children are Ade Kosasih Sunarya, Iden Subasrana Sunarya, Ugan Sunagar Sunarya, Agus Muharam and Imik Sunarya. Asep also studied with Dalang Tjetjep Supriadi (also spelt Cecep Supriadi) of Karawang. Asep’s troupe is Giri Harja III (Mountain of Good Fortune) and is located in Jelekong, Ciparay. Family members as well as top professional singers and musicians make up his troupe.

Asep undertook his first performances in the l970s and has been phenomenally popular since the 1980s when he began appearing on television (“Asep Show”), in radio, and making cassettes. He won the Binojakrama contest for best dalang in 1982 and a number of times thereafter. He performed in the United States in 1992 and has since done tours to England and performed and taught at the Institut International de la Marionnette (Charleville-Mézières, France). Asep is especially noted for his innovations in movement, puppet building, and music. His wayang (puppets) do spectacular somersaults in his fight scenes. Asep created a sensation in the 1980s with new ogres who vomit spaghetti or whose heads split open and brains ooze out.

Asep Sunandar Sunarya innovated a new style of gamelan (gong-chime)  orchestra in which, by switching a few keys, musicians can play in different musical modes. Wherever Sundanese culture is known, Asep is a star. His son Dadan is also a dalang and often plays clowning scenes together with the clown puppet Cepot. Asep has done innovative collaborations with Ki Manteb Soedarsono and Slamet Gundono.