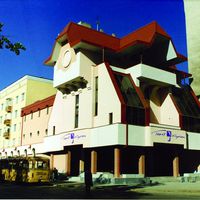 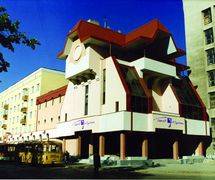 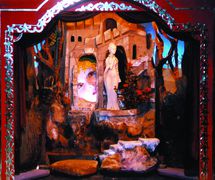 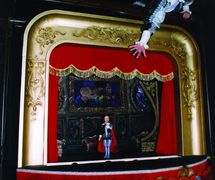 Russian puppet theatre founded in 1932 by a group of enthusiastic actors. The largest in the Urals region and Siberia, the Yekaterinburgsky munitsipalny teatr kukol (Yekaterinburg Municipal Puppet Theatre) owns two stages and auditoriums seating 286 and 80 spectators, respectively, workshops for puppet and set construction, and all the requirements for the production and performance of sophisticated theatre.

Like most Russian puppet theatres, initially it was designed to address child audiences. The creative approach of the company underwent change in 1974 when Roman Vinderman (1945-2001) became its leader. Vinderman was an adept of the avant-garde movement known in the history of Russian puppet theatre as the “Ural Zone” (see Russia, The “Ural Zone”). He brought major literary works to the theatre’s stage, including Pokhozhdeniya bravogo soldata Shveyka (The Adventures of the Good Soldier Ŝvejk, 1975) by Yaroslav Hašek, Banya (The Bath House, 1979) by Vladimir Mayakovsky, and Sirano de Berzherak (Cyrano de Bergerac, 1981) by Edmond Rostand. His productions brought the puppeteer from behind the screen and on to the stage, allowing him/her to perform as a dramatic actor, singer, mime or acrobat. This period of 1974 to 1983 is regarded as the most exciting time in the records of the Yekaterinburg Municipal Puppet Theatre.

In 1988, Vladimir Garanin (1954-2002) became the theatre’s principal director. One of his most spectacular productions was Svet likujuschiy (The Light of Triumph, 2000), a gala performance dedicated to the Millennium of the Baptism of Russia.

From 2002 to 2005, the theatre was led by Aleksandr Borok, one of the leaders of Russian puppet theatre. His Don Zhuan (Don Juan, 1997), The Hamlet (2003, meaning “a small village”) and Chaika (The Seagull, 2004) of Anton Chekhov, combined the grotesque with the dramatic, and all three productions became the company’s greatest successes.

From 1983 to 2009, Andrei Efimov (b.1960) joined the company. Actor, painter, puppet maker, he also authored his own productions, Illuzion (Illusion Theatre, 1998) and Solovei (The Nightingale, 1999). In 1997, Kartinki s vystavki (Pictures from an Exhibition), staged by Aleksandr Borok and Sergey Plotov, won the Golden Mask Award (Russia’s national theatre prize) in the nomination category “Best Stage Designer” for Andrei Efimov.

The Yekaterinburg Municipal Puppet Theatre has, since 2002, hosted Petrushka Velikiy (Petrushka the Great), an international puppetry festival, one of the most prestigious in Russia.