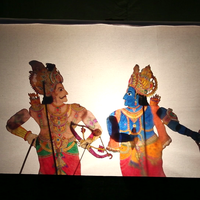 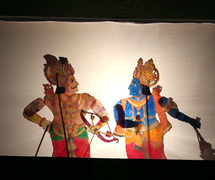 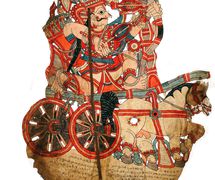 Key personality in the epic Mahabharata, therefore important in the puppet and shadow theatres of India and in South East Asia. Arjuna, third brother by age of the five Pandava brothers, is presented in different roles all through the epic. Protégé of Krishna, who becomes his charioteer during the battle of Kurukshetra, Arjuna is the finest archer in the whole kingdom. His physical beauty and nobility is the cause of much admiration and desire amongst women, who offer themselves to him, and whom he sometimes refuses.

During his exile, which he shares with his family, Arjuna is forced to conceal his identity. He finds employment as dance instructor at a royal court, and takes on the identity of a transvestite. In this guise of a eunuch, he is sometimes mocked. Draupadi, his wife, who is also the wife of his four brothers, will bear him a son, Abhimanyu, who will sacrifice his own life in one of the many battles depicted in the Mahabharata. Some communities in India claim allegiance to the cult of Arjuna, making offerings to his image, where he is portrayed as a young man with a bow.
Arjuna the warrior and sometimes the dancer, an important character in all puppet and shadow theatre traditions which showcase episodes from the Mahabharata, is generally represented with a golden crown or a corolla of gold. His dark face often sports a moustache, as in yakshagana gombeyata and tolu bommalata. Generally depicted in profile in shadow puppetry, Arjuna is shown wearing a determined, even fierce, expression on his face.