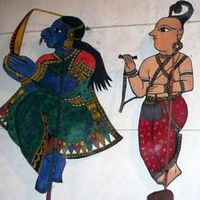 Traditional shadow theatre from Maharashtra in south-west India. In the Marathi language, bahulya means “figure” and chamdyacha (or chamadyacha) “leather”. Bordering Maharashtra, Goa and Karnataka, the village of Pinguli is renowned for its puppeteers who belong to the Thakur/Thakar Adivasi community whose men are mostly fishermen and also farmers. In each troupe, a puppeteer-storyteller, assisted by a helper, is accompanied by two musicians, one who plays the dholak and pakawatch (two-headed skinned drums), the other the jodiwala and wata (wind instruments). Both musicians are also singers.

A complete ensemble of puppets consists of sixty-five figures carved from translucent and coloured buffalo leather, without perforations or articulations except for, sometimes, a single mobile arm attached to the body of the figure by a leather pin. A wooden or bamboo rod runs vertically through the figure. Seated on his heels, the puppeteer holds the rod with his left hand and moves the arm or the entire body by making small lateral movements with his right hand. The tallest figures measure 35 centimetres and the smallest 11 centimetres in height. The characters of kings and gods, drawn in Mughal style, have moustaches, beards and wear baggy pants.

A performance usually starts with the dancer figure at the court of the god Indra, followed by the figure of Haridas, the storyteller who begins the tale in Marathi. Scenes from Valmiki’s Ramayana as well as from Panchavati (The Story of Draupadi) and episodes from Ravana Badha (The Defeat of Ravana) are sung by the principal puppeteer in Tamil or Kannada (two South Indian languages) and then spoken as dialogues by the musicians.

A permanent stage set up in the village is enlarged around the temples or sanctified places during religious festivals or during large fishing and crop harvests. The white cotton screen is 6 metres wide by 3 metres high with its lower end resting on the ground.

Today, there are troupes and traditional families performing chamdyacha bahulya, some of whom are master puppeteers recognized in their communities and sometimes nationally for their contribution to the art of puppetry.