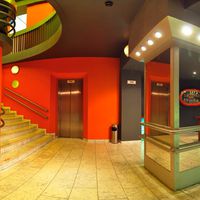 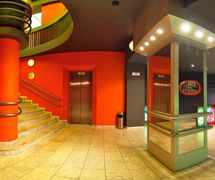 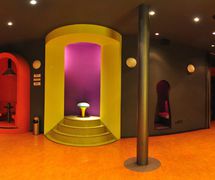 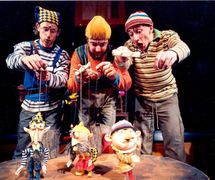 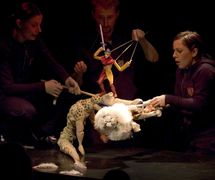 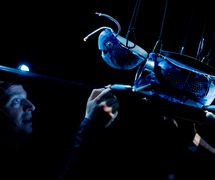 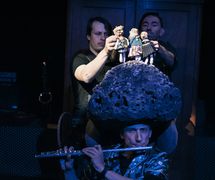 Czech puppet theatre founded by Jan Malík in Prague in 1949. This theatre was officially opened on February 26, 1950 with the premiere of Pan Johanes (Mr John). Established in the Náměstí Maxima Gorkého today Senovážné Náměstí (Senovážné Square), the theatre also had branches in Brno, Liberec, České Budějovice and Kladno.

During this period, rod puppets were not widely used on Czechoslovak stages. However, strongly influenced by the Soviet repertoire of the Sergei Obraztsov Central Puppet Theatre (see Gosudarstvenny Akademichesky Tsentralny Teatr Kukol imeni S.V. Obraztsova) in Moscow run by Sergei Obraztsov, especially by two productions: O velkém Ivanovi (On Ivan the Great, 1950) and Hrdinové severu (Heroes of the North, 1952), Prague’s Central Puppet Theatre took up the rod puppet as its principal puppetry style. Thereafter, the company used this technique in the productions it created with renowned Czech writers and poets, such as Josef Kainar, František Pavlíček, and Jan Vladislav.

Among the theatre’s early works, of particular note are Zlatovláska (Goldilocks, 1952) and Slavík (The Nightingale, 1958). Later, the theatre was inventive in combining actors and puppets in Míček Flíček (The Vagabond Balloon) at the Divadlo Sluníčko (Little Sun). One would find a variety of styles and techniques presented in schools or in some of the theatre’s works, including black theatre, masks and other techniques, including glove puppets and string puppets. The repertoire was primarily aimed at children although there were some works for adults, such as Mozart’s Apolon a Hyacint (Apollo and Hyacinth), created as shadow theatre in 1956.

The theatre, which made several tours to the USSR, Romania, Italy, Belgium, Cuba, and Mexico, has changed its name several times; since 1991 it has been called Divadlo Minor (Minor Theatre). In addition to its productions for children, the repertoire now includes plays for teens and adults, such as Nebe nad Andělem (Skies Over Anděl, 1998).

In 1999, the buildings that housed the theatre as well as the general secretariat of the Czech branch of UNIMA were demolished to make way for the reconstruction of Slovanský dům (Slavic House, the fashionable part of old Prague). Minor Theatre is now located in Prague’s Vodičkova Street.