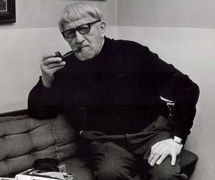 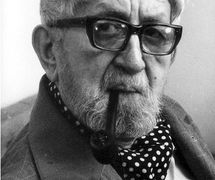 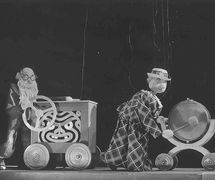 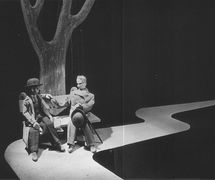 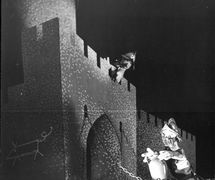 Czech puppeteer, director, dramaturge and author, theoretician, historian and teacher. Jan Malík graduated in classical philosophy studies in 1930 from Charles University in Prague (Czech: Univerzita Karlova v Praze). Even as a student he was interested in the puppet theatre, initially as an actor in the Sokol Puppet Theatre (The Falcon Association; focused mainly on physical education) in Prague-Libeň. In the early 1930s, he distinguished himself as an author, stage director and key personality in the modern puppet theatre movement.

At this time in his career, Jan Malík’s creativity was steeped in his theoretical and historical knowledge of the world of puppetry. He was thus able to analyze the issues confronting this type of theatre, whose future tendencies and developments he could foresee. Malík understood that the puppet theatre was a specific kind of art form with its own laws, but he also insisted that it be integrated into theatre arts in general, and above all that the essential role of the stage director be recognized. He tried to apply these principles to the productions of the Pražská umělecká loutková scéna (Prague Art Puppet Stage) that he founded in 1939. He wrote a number of plays for children of which the most successful was Míček Flíček (Roly Poly, 1936), translated into many foreign languages. During the Nazi occupation, he wrote three plays for Josef Skupa‘s puppet theatre: Voničky (The Little Bouquet, 1940), Ať žije zítřek! (Long Live the Future!, 1941), and Dnes a denně zázraky (Today and Everyday Miracles, 1942), which spoke to the Czech audience in the language of allegories and symbols.

Even before the end of the war he planned the new reorganization of the Czech puppet theatre. He strove primarily to create a network of professional puppet theatres all across the country. In 1948, he was entrusted with establishing the Ústřední loutkové divadlo (Central Puppet Theatre, today Divadlo Minor Minor Theatre) in Prague and its branches in Brno, Liberec, Kladno and České Budějovice. He became the manager (1949-1966) and stage director (1949-1971) of the Prague Central Puppet Theatre in the 1950s and 1960s, and was the first stage director to imprint the stamp of his personality both on this theatre and the entire area of Czech puppetry. As a dramaturge he supported original works and dedicated himself to drama adaptations and translations of puppet theatre plays. He strove to assert a model of puppet staging that would communicate basic moral values to young audiences through visual artistry and poetic speech.

Jan Malík was inspired by the Soviet puppet theatre and followed the example of Sergei Obraztsov by introducing Indonesian-style wayang puppets (in Czech, javajky or “rod puppets from Java”) in the staging practices of the Czechoslovakian puppet theatres. His production of Zlatovláska (Goldilocks, 1952) by Josef Kainar was part of the significant directorial efforts of this period. In 1951, he was co-founder of the very first Puppet Theatre Department (Katedra Loutkářství) at DAMU (Divadelní fakulta Akademie múzických umění v Praze, Theatre Faculty of the Academy of Performing Arts in Prague) where he lectured on theories of directing and the history of the puppet theatre.

In the 1960s, Jan Malík concentrated more on historical research. In 1963, he published a monograph devoted to Josef Skupa titled Úsměvy dřevené Thálie (Smiles of the Wooden Thalia). He summarized his aesthetic views in the publication Svět loutek (The World of Puppets, 1978). Malík began major research in the world of Asian puppetry (India, Sri Lanka, Indonesia and other South East Asian countries, 4 vols., 1983), which was published posthumously. He published the magazine Loutková scéna (Puppet Theatre Stage, 1940-1941, 1945-1950) and puppet theatre plays. From 1933 to 1972, Jan Malík was General Secretary of UNIMA, and then the organization’s Honorary President.