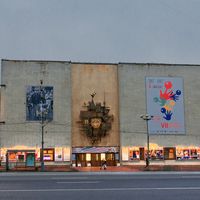 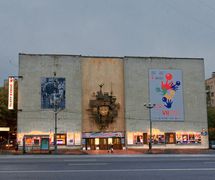 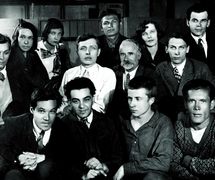 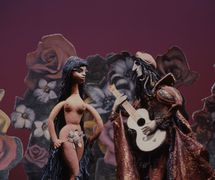 The theatre was devised as an “experimental laboratory of the puppet genre”. Its founding members included Sergei Obraztsov, the artistic director, Evgeni Speransky, the leading actor and playwright, and Ivan Zaitsev (1863-1936), a folk puppeteer. Since 1936, Boris Tuzlukov was the theatre’s principal designer and, in 1938, Lenora Shpet, one of the company’s founders, became its dramaturgy consultant. Initially, the theatre’s staff consisted of twelve people, who premiered on April 17, 1932 with Andrei Globa’s Dzhim i dollar (Jim and the Dollar).

In its first nine years the theatre was mainly child-oriented in its repertoire. The selection of the repertoire was complicated by the nationwide “fight-the-fairy-tale” ideological campaign that viewed fairy tales as the promoters of mysticism alien to the Soviet youth. The company’s first productions, Dzhim i dollar and Bratya Mongolfie (The Brothers Montgolfier, 1934), had adventure plots combined with specific puppetry effects such as animal imagery and silent-movie-style motion. Po schuchiemu velenju (At the Wish of the Pike), a traditional Russian folk tale, was added to the theatre’s playbill in 1936, immediately becoming the company’s biggest hit. In 1937, the theatre moved into a building of its own where the Puppetry Museum was established headed by the actor-playwright, Andrei Fedotov (1900-1963). In 1940, Sergei Obraztsov staged Volshebnaya lampa Aladdina (Aladdin’s Magic Lamp), his first-ever rod puppet production for adults. The play marked the beginning of the theatre’s lyrical repertoire.

In 1946, the idea of a parody show was realized in the globally recognized production, Neobyknovenny kontsert (The Unusual Concert, also translated as The Extraordinary Concert), designed by Valentin Andrievich (1908-1985). Having toured over forty countries, the company’s performance influenced many theatres around the world. Training courses for domestic and international puppetry professionals were opened at the theatre. However, while gaining in mastery the theatre began to lose its experimental flair, repeating itself in the previously discovered forms. The Bucharest International Puppet Festival, held in connection with the 6th UNIMA Congress in 1958, stimulated a certain renewal as the theatre attempted to re-establish its relationship with the audience. It succeeded, as demonstrated by its production of Bozhestvennaya komedia (The Divine Comedy, 1961) in which live actors, masks and puppets acted together on stage. The black light, luminescent silhouettes of actors, puppets, and large masks proved that the company was once again entering a period of active research into new means of expression.

In 1970, the theatre moved to a new, specially designed building in the centre of Moscow. By then the company had a staff of nearly three hundred. Alina Speshneva (1940-1984) became chief designer, enriching the theatre’s aesthetics with the artistry of film animation and a jeweller’s precision in her creation of puppets that were vivid and clear set against simple backgrounds. In the 1970s and 1980s, the theatre added to its repertoire a number of universally acknowledged parodies, such as Don Zhuan (Don Juan, 1975). Along with Sergei Obraztsov, the directors Semyon Samodur (1911-1992) and Vladimir Kusov (1923-1997) staged their own productions with the company.

In 1976, the theatre served as the main stage for the International Puppetry Festival, held in connection with the 12th UNIMA Congress. By that time, however, the definitive processes in Soviet puppetry were determined by the younger generation of directors and designers, at the time known as “the new wave”.

After Sergei Obraztsov’s death in 1992, designer, director and scenario writer Rezo Gabriadze led the company for a brief period (1993-1995). After Gabriadze’s departure from the Obraztsov theatre, the company invited a number of well-known directors and designers such as Mark Rozovsky and Sergei Tyunin for Mikhail Saltykov-Shchedrin’s Istoria odnogo goroda (The History of a Town, 1997), the Estonian director Rein Agur and Elena Lutsenko for William Shakespeare’s Komedia oshibok (The Comedy of Errors, 1998).

In 1999, Ekaterina Obraztsova, a director and actor, the granddaughter of Sergei Obraztsov, staged her first production at the theatre. This was Pikovaya dama (The Queen of Spades), based on Aleksandr Pushkin’s story and co-created with well-known Russian designer and book illustrator Sergei Alimov who was appointed the theatre’s principal designer in 2000.

Andrei Dennikov (1978-2014), who joined the company in 2000, was a producer whose productions were very popular with Moscow theatregoers. They are “one-man show” performances: Dennikov was the author, director, designer, singer, and performer of all the main roles. His best-known productions include Malenkiye tragedii (The Little Tragedies, 2000), Ispoved khuligana (The Hooligan’s Confessions, 2002), and Karmen! Moya Karmen! (Carmen, Oh My Carmen!, 2004).

Since 2001, the theatre has held the Obraztsovfest, an international puppet festival which, in 2011, coincided with three jubilees: Sergei Obraztsov’s 110th birth anniversary; 80 years of the theatre bearing his name; and the festival’s 10th anniversary. To mark these dates, the theatre’s festival bill included the super show Bolshoye puteshestvie: drakony, demony, geroi (Grand Voyage: Dragons, Demons, Heroes), directed by Ekaterina Obraztsova with stage and puppet design by Viktor Platonov, a medley of the world’s best-known puppet plots, puppets and masks.

Since 2008, the company has collaborated with leading Russian puppetry directors and the winners of the Golden Mask – the annual Russian national theatre competition of performing arts. Among them, Boris Konstantinov is known for his productions Duimovochka (Thumbelina, 2008) and Snegovik (Snowman, 2011), Aleksei Smirnov for his production Zolushka (Cinderella, 2009), and Evgeny Ibragimov, whose Svadebka (The Wedding, 2011) is a dramatization of an Anton Chekhov work.

In 2013, Boris Konstantinov became the principal director of the theatre. His productions include Vse drugie i sobaka (All Others and the Dog, 2014), based on poems of Vadim Levin, Ali Baba i sorok razboinikov (Ali Baba and the Forty Thieves, 2014), Bezumny den ili zhenitba Figaro (Crazy Day or the Marriage of Figaro, 2015) after Pierre Beaumarchais.

Since 1937, the theatre’s Puppetry Museum, one of Europe’s largest, has operated successfully with a sustained influx of new exhibits and tours it undertakes to show displays in Russia and abroad.

From 2000, the Sergei Obraztsov State Academic Central Puppet Theatre has published the magazine, Teatr chudes (Theatre of Miracles), highlighting the achievements of Russian and global puppet theatres along with analytical articles about these companies as well as scenarios of plays.