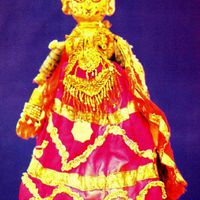 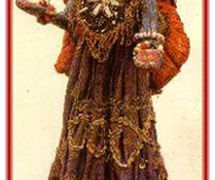 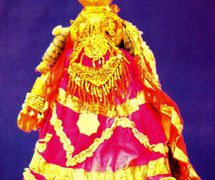 Traditional string puppet theatre from Orissa (Odisha) on the east coast of India. These are beautiful puppets worked by three strings attached to a bamboo triangular control, which, as their name indicates (kundhei, puppet, and gopalila, story of Radha and Krishna), traditionally depict the life of Krishna (avatar of god Vishnu). However, these puppets are becoming increasingly rare, being replaced more and more by puppets from other regions of India, while the puppeteers who worked them, the ahir gopal from the caste of cowherds, are being supplanted by puppeteers from other states.

Legend has it that the cows that came long ago from Vrindavan, the birthplace of Krishna, would have recounted the episodes of the god’s life on earth. The puppeteers make the large puppets, measuring more than 60 centimetres tall, which are sculpted from wood. The puppets’ faces and limbs are coated with a layer of lime and then painted. In southern Orissa, the puppets have legs which touch the ground; in the north, the puppets are without legs. One single puppeteer along with his assistant is all that is needed to work the puppets, up to four or five puppets at a time. A pakhawaj player (elongated drum with both heads made of skin), and sometimes a harmonium player, support the performance that is both told and sung by the showman concealed behind a dark cloth screen.

One show can last up to thirty or forty minutes. The puppeteer repeats the performance many times during the course of an evening. Once the spectators leave, the puppeteer and his family undress the puppets and lay them down to sleep in a metal crate.

Today, some traditional performers are recognized in their communities and sometimes nationally for their contribution to the art of puppetry.