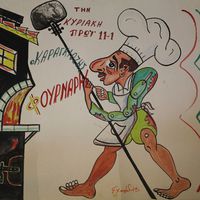 Officially the Hellenic Republic (Ελληνική Δημοκρατία), known since ancient times as Hellas (Ελλάς), modern Greece is located in south-eastern Europe, at the crossroads of Europe, Asia and Africa, and traces its roots to the civilization of Ancient Greece.

According to the stories of Hephaestus, blacksmith to the gods, creator of three-wheeled automobiles (Homer, Iliad, XVIII), of the bronze giant Talos, or Daedalus, architect to King Minos, “mechanician”, inventor of moving statues (Plato, Menon, 97), Greek mythology bears witness to the creation of animated figures, if not true puppets. Greek cults made use of more or less figurative statues (bretas, xoanon, agalma), but there is nothing to indicate that they were articulated, as were those of the Egyptians, if one is to believe the Histories (II, 48) of Herodotus (5th century BCE). One may learn of the processions containing phallic statuettes in the rites of Dionysus (Dionysos) in Greece which were mainly characterized by the role of the mask.

On the other hand, there are many descriptions of true puppet shows which certainly existed in Ancient Greece. In The Banquet (chap. 4, §55) Xenophon (5th to 4th centuries BCE) tells us that among the guests invited by Callias to this symposion, a showman from Syracuse demonstrated his “puppet” (neurospaston, neurospasta = moved by sinews or threads see [lier]Neuropasto[/lier]), but it is difficult to determine the exact nature of this figure. At least this text provides testimony of the presence of different types of entertainer, probably including puppeteers. In his allegory of the cave (The Republic, Book 7) Plato (4th century BCE), in order to illustrate his thoughts on the illusory nature of the senses, also refers to a “maker of marvels” and his “wonders” (tois thaumatopoiois “those who perform feats of skill, magicians”, often interpreted as “puppet showmen”). In The Banquet of the Sophists (Book 1, §35), Athenaeus (3rd century CE) tells of a certain Potheinos, a then celebrated neurospaste who performed in the theatre of Dionysus in Athens. Elsewhere, in the 1st century CE the Treatise on Automata by the engineer and mathematician Heron (Hero) of Alexandria had already described the first example of a “mechanical theatre” with figures put in motion by wheels and cylinders activated by the movement of sand (see Automata, Androids and Robots, Mechanical Theatres).

Documentation of puppet performances in the Byzantine age is rare, though it is probable that string puppets were presented in the fairs and the streets. In the 6th century, it appears that the showmen utilized small, animated wooden icons on the occasion of a wedding. However it was, these ancient traditions have fallen into disuse and have little influence on the puppetry of modern Greece.

From the 17th century, the Ottoman Empire introduced its karagöz shadow theatre. With the coming of Greek independence between 1821 (the start of the insurrection) and 1829 (Treaty of Andrinopoulos), the Turkish karagöz was progressively modified and “Hellenized” under the name of its hero karaghiozis (Καραγκιόζης). In the new kingdom – which in its first years comprised only the Peloponnese, the Cyclades and a portion of continental Greece – the karaghiozis show retained its original traits, in particular the hero brandishing his phallus which acted as a cudgel, together with a taste for bawdy jokes. These elements however were not tolerated by the new urban bourgeoisie, as evidenced by the censure of the Athens press which demanded their removal: nevertheless this kind of show survived and retained its great popularity. Its showmen belonged to the Anatolikon Theatron, and were transplanted to Athens, the new capital city, apparently by a certain Vrachalis whose play The Hammam, in the Turkish traditional style, was at that time much in demand.

But as soon as the Hellenic territories were augmented in 1881 by Thessaly and southern Epirus, a new tendency – “heroic” or “in the Epirotic Tradition” – was born. Inspired by the battles against the Turks, it drew its themes from historic or legendary events. One of these became a classic of the genre, Alexander the Great and the Cursed Serpent (Modern Greek: Ο Μέγας Αλέξανδρος και το καταραμένο φίδι), and was based on popular chapbooks about Alexander or fairy stories featuring a mythological dragon-killing hero (see Alexander the Great). A puppeteer who followed this current was Mimaros, who, after 1890, developed the genre with the introduction of new characters.

Between 1860 and 1870, the fasoulis (Φασουλής) glove puppet tradition made its appearance, no doubt of Italian provenance, judging from the names of some of the characters. But this never displaced the karaghiozis tradition which between 1890 and 1930, when the Greek puppet theatre was eliminating more and more of the old models, entered a Golden Age, attracting an ever wider public – essentially adult – more numerous than all other forms of theatre put together.

In the 1930s, the Greek puppet theatre (glove or rod figures) was enlivened by The Living Marionettes of Zappeion, a group founded by Vassilis Rotas with Nikos Akiloglou in collaboration with the National Theatre in 1934-1935. From then on the genre was dedicated to children. But just as a number of young artists began to be initiated into the art form, World War II erupted. The Puppet Theatre of Athens, founded by Eleni Theohari-Peraki, was forced to adapt itself to entirely new conditions created by the German occupation in 1941. Its characters, Barba-Mytousis (who played the leading part and who lasted 46 years), the good uncle (a rod puppet), his nephew and niece, Klouvios and Souvlitsa (glove puppets), became very popular with the public, and the company forged a reputation for children’s work, folk tales and myths of high quality.

From the 1960s, when the karaghiozis theatre, founded on improvisation and an oral tradition, lost much of its support – becoming nonetheless the subject of literary and ethnological studies – some new groups, amateurs and professionals, were formed, exploring new avenues, whilst the classic theatre even began to borrow certain elements from the puppet theatre. At this stage, Lakis Apostolides produced his shows in theatre and in the new field of television with string puppets and recorded music and dialogue. For his part, Dimitrios Sofianos founded his Little Scene, which also produced many shows for the stage and for television. His son Faidonas continues his work today.

The Contemporary Scene since the 1970s

Soon after the fall of the dictatorship of the Generals, Greek puppetry clearly turned towards politics, notable even in the work for children. In 1975, Eugenia Fakinou presented Deneketoupoli (The Can City), a production influenced by techniques adopted from Yugoslavia and Bulgaria. Other young artists attracted to the art form introduced object theatre to Greece. In 1978, the puppeteers Takis and Mina Sarris created the Greek Puppet Theatre, freeing itself from traditional forms and the narrow limitations of existing practice. It was distinguished by its work with shadows, black theatre and masks. In the same period, in Crete, Ariadni Nowak also began work based in black theatre, among other techniques.

In 1985, Michael Meschke founded a festival on the island of Hydra, followed in 1992 by another festival in Crete initiated by Ariadni Nowak. Through these, the Greek public and puppeteers came into contact with artists from other countries, facilitating the birth and development of a new generation of puppeteers influenced by the European scene, such as Kostas Hatziandreou’s company Tiritomba, Christos Aftsides’ Harhout Puppet Theatre, and Stathis Markopoulos’ Ayusaya! Puppet Co. The television Muppet-style puppets of Manthos and Anna Santorinaiou, the Baruti Marionettes of Francisco Britto, the Gri Kouti Company of Antigoni Paroussi, the Prassein Aloga Company of Emmanuela Kapokaki, also Chryssoula Alexiou, and numbers of other groups working now in Greece – all are contributing to a growing interest among the young and inspiring a new generation of artists.

As for the karaghiozis, it is affirmed by a new and very lively generation of showmen and women (Kostas, Yannis and Argyris Athanasiou, Yannis Dayakos, Athos Danelis, Tasos Konstas, and Helias Karelas among others), reviving the art of their teachers and performing in schools, theatres and festivals.

In 1990, through the initiative of Michael Meschke, the Greek Centre of UNIMA was launched, and since 1996 it has organized various activities (exhibitions, workshops, a library and video library, the magazine Nima … ) from its base in Athens. In addition, an important festival takes place every year in Kilkis in the north.

There is still no official professional training in Greece. Beginners must train themselves, go abroad or work within existing companies. The art of puppetry (in its educational aspect) is taught only in the Department of Pedagogy at the University of Athens. In Marousi, near Athens, there is a karaghiozis museum – the Spathario Shadow Theatre Museum – founded by Eugenios Spatharis (son of puppet showman Sotiris Spatharis), one of Greece’s most famous puppeteers. A few traditional puppets are to be seen in the Theatre Museum in Athens and in the Peloponnesian Folklore Museum in Nafplio (Nauplia).