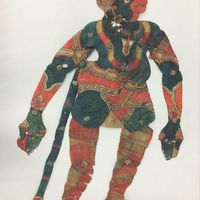 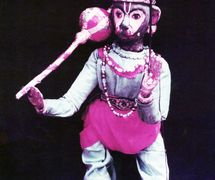 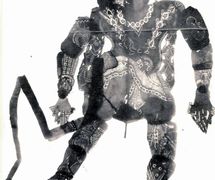 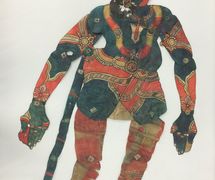 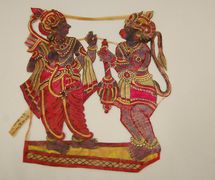 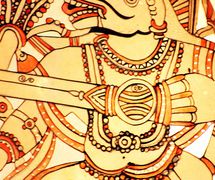 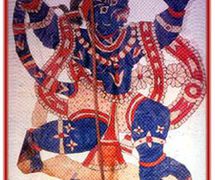 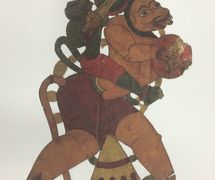 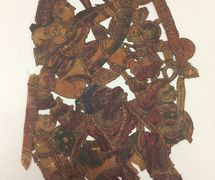 One of the principal characters of the epic Ramayana and of theatrical performances in India and South East Asia. Hanuman, the commander (in some traditions the king) of the monkey army, loyal ally of Rama, is an imposing figure who can change his form and size as he possesses magical powers. In India, Hanuman is black or red, while in South East Asia he is white. A scholar (he reads Sanskrit in India), Hanuman also possesses great wisdom and is a master strategist. In South East Asia, in contrast to India where he is a celibate in Vaishnavite versions (Vaishnavism, branch of Hinduism venerating Vishnu), Hanuman is depicted as a charming lover as well as a martial hero.

In Indian dance-dramas, puppet shows and shadow theatre, Hanuman is usually shown wearing a crown, with a gleaming coat of fur made of cotton and vegetable fibres, dressed in golden vestments, with a headgear-cum-parasol, usually crimson-red. In Indian theatre and dance-drama performances, especially kathakali, Hanuman makes slow gestures, often with no pretence of miming an animal. In the Indian puppet theatre, yakshagana gombeyata, his back ends in a long tail with which he burns down the kingdom of the demon king Ravana when his tail is on fire. In Indian puppetry traditions, Hanuman is always depicted with a tail.

In South East Asia, his powerful warrior-like moves are punctuated by monkey-like scratching and his voice may have an occasional monkey squeal. In Indonesia, Hanuman (also Hanoman and Anoman, among his many names) can be recognized by his white colour and his skirt, which will be black and white check in Bali or black-white-red-yellow in Java – a pattern which denotes spiritual power. Hanuman also has the pancanaka, a long fingernail/weapon that forms when the five fingers (senses) fuse in meditation, another sign of extra-normal puissance. In Indonesia, Hanuman is often said to be the son of Batara Guru (God Siwa/Shiva) rather than Batara Bayu (God of the Wind) as is found in the Indian versions. In Java, his mother is Lady Anjani, the daughter of a hermit who has been transformed into a simian and is doing meditation in a stream to regain human form. When the semen of Batara Guru floats into her mouth, the meditating monkey-lady miraculously gives birth to this hero-to-be. Batara Guru then orders all the gods to have monkey children to give Hanuman playmates, and these later help Rama wage war with the demon king of Alengka (Rahwana in Indonesia). Hanuman Duta (Hanuman the Messenger) is a favourite play in Indonesia as Hanuman leaps from India to Alengka, finds Sita (Rama’s wife) imprisoned in the garden of the Asoka tree, woos Trijata (niece of Rahwana and Lady Sita’s companion) and, as in India, when caught and torched by Indrajit (son of Rahwana), sets the towers of the city on fire with his tail.

In mainland South East Asia (Thailand, Cambodia), we find new episodes that feature this hero. Hanuman’s dalliance with Suvanna Maccha, a mermaid daughter of Thosakan (Ravana), during the episode where the monkeys build a bridge to Alengka, results in a child, Mudchanu, who is part monkey and part fish. In another popular episode, Benyaki (a niece of Thosakan) disguises herself as Sida (Sita) to make Ram (Rama) think she is dead, and the “corpse” floats on the stream. Hanuman reveals the ruse and makes love to the beauty who he shows is very much alive. Later, Hanuman fetches magic medicine to revive Ram’s brother Lak (Lakshmana) when struck by a weapon. Then Hanuman becomes the king of the monkey kingdom at the conclusion of the tale.

The Chinese figure of Sun Wukong (Monkey King), who helps bring the Buddhist Scriptures (Tripataka) from India to China and who has magical powers and protects the hero-monk, may be a Chinese Buddhist permutation of this monkey hero who is respected, applauded, and sometimes revered as a divinity throughout South and South East Asia.