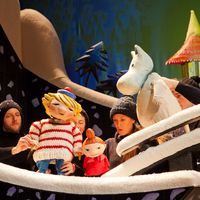 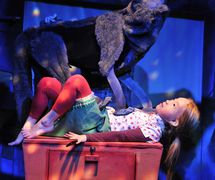 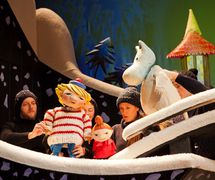 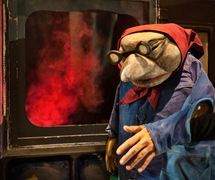 British mask, actor and puppet company founded by Bob Frith, visual artist, in 1978 in Rossendale (Lancashire). Horse and Bamboo combines large-scale puppets and masks with other media, drawing on popular street theatre techniques and strong social commentary. Frith worked with Bread and Puppet Theater and Welfare State International, and influences from both are apparent in his work. During the 1970s and 1980s the company was largely known for its summer tours in horse-drawn vehicles.

Shows included site-specific work such as The Legend of Ellen Strange (1978) given in Rossendale on the murder of a young woman by her lover in the 18th century; shows drawing on the work of other artists such as Pictures from Breughel (1979) or stories celebrating the lives of characters from folk culture such as The Woodcarver’s Story (1982). From the early 1990s the company extended their summer season to seven-month long tours, when the horses were replaced by vans.

International and cross-cultural elements performed with a range of puppetry techniques are all significant features of the company’s work, particularly manifest in La Dama Azul (1986) and Dance of White Darkness (1994-1995). A collaboration with the Nigerian author and playwright Sam Ukala culminated in the outdoor spectacle Harvest of Ghosts (1999), and a show based on the imagery of the Mexican Day of the Dead, A Strange and Unexpected Event (2004-2005) was very well received.

Horse and Bamboo also runs “the Boo” – a unique arts centre at the company’s base in Waterfoot which puts on a regular programme of arts events for the community of Rossendale and East Lancashire.