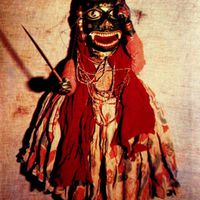 Traditional string puppet theatre from Maharashtra in south-west India. The performers of kalasutri bahulya (kalasutri, string, and bahulya, puppet), descendants of families of puppeteers that originally came from Rajasthan and Gujarat, are today very few in number. Their performances centre on the many episodes of the Ramayana, beginning with the accounts of the birth of Rama and ending with the killing of Ravana.

The small puppets, finely sculpted from wood, wear elaborate headdresses, turbans and ornaments. Articulated at the shoulders and knees, the puppets do not have strings attached to their feet, which remain free. A string attached to the head joins one connecting to the back and two others extending from the hands. A single musician sings the text and alternately, in turn, plays the tabla and the cymbals.

The puppeteers offer flowers, rice, and coconuts before the performance begins, which opens with the arrival of Ganesh riding on his rat. The goddess of knowledge, Saraswati, appears and dances with Ganesh. In between episodes from the Ramayana, thieves and clowns perform comical and satirical interludes. The performance ends with the appearance on stage of Shiva riding the bull Nandi.

Today, there are troupes and traditional families performing kalasutri bahulya, some of whom are master puppeteers recognized locally and sometimes nationally for their contribution to the art of puppetry.