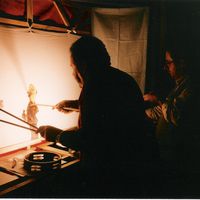 Turkish shadow theatre puppeteer. Metin Özlen began playing karagöz at the age of five under his grandfather Hayri Bey and relative Hayali Memdah. He made his first leather figures around age twelve. They were exceptionally delicate and finely cut, chiselled and worked, as well as remarkable to their colour. Many museums and collections in Turkey and abroad possess these beautiful examples of his truly exceptional work as a puppet maker.

A manipulator of great dexterity, Metin Özlen has a remarkable talent for acting. In 1976, his Fishermen won first prize among the dozen competing shows in a contest organized by the Ministry of Culture. In the same year he created Hayali Safderi Gölge Tiyatrosu (Precocious Hayali Shadow Theatre) and augmented his repertory with the old story Leyla ile Mecnun (Layla and Majnun the Madman). It was produced for television in an adaptation with Professor Metin And (Dramatic Arts, University of Ankara, specialist in this area and author of many books). Metin Özlen has researched classic plays including Leyla ile Mecnun (Layla and Majnun) and Ferhat ile Şirin (Farhad and Shirin/Khosrow and Shirin) with his wife, Mahmure Özlen, and performed them as shadow plays.

Metin Özlen has given numerous performances in Turkey and abroad, notably in Great Britain, the United States, Belarus and in France at the Maison des Science de l’Homme (Anthropology Museum, Paris) in 1991. He has received numerous awards since 1976 both in Turkey and abroad. UNIMA Turkey acknowledged his more than 50 years of service to karagöz in 2008 with an Outstanding Service medal. In 2010, he participated in a UNESCO Masterpieces of the Intangible and Oral Heritage of Humanity event, celebrating the 2009 recognition of Turkish shadow theatre as a protected art form. Metin Özlen was awarded in 2010 as one of the seven Turkish Living Treasures by UNESCO and the Turkish Ministry of Culture and Tourism.