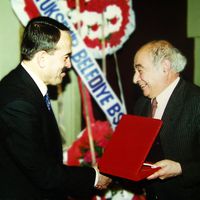 Turkish author and scholar of puppet theatre. After recieving a degree in law (Istanbul, 1950), Metin And studied in England for his MA, becoming interested in the arts, and later spent time in the United States viewing arts with a Rockefeller Foundation grant. Begining in 1953, he wrote for Pazar Postası (Sunday Post) and Forum Magazine (which he acquired, founding Forum Publication). After 1956, he wrote on theatre and dance for the newpaper Ulus (Nation).

Metin And lectured at the theatre department of Ankara University Dil ve Tarih Coğrafya Fakültesi (DTCF), founded in 1958, and later served as director (1980). He completed his doctorate (1968), assistant professorship (1974, thesis on Ottoman theatre) and full professorship (1980) with his research titled Dünyada ve Bizde Gölge Oyunu (Shadow Play in the World and in Our Country). In 1976, he helped found The Comminity of State Folk Dances, Ministry of Tourism. His work and constant presentations nationally and internationally drew attention to and support for traditional arts in general and shadow theatre in particular. In 1990, he led a group that gave many karagöz presentations at international conferences. He collaborated with puppet masters on performance projects, and gathered puppet masters for training workshops. He took part in national and international congress and symposiums, regulary lecturing on Turkish theatre.

He  was a founder and the first president of UNIMA Turkey (1993-1995), and later became honorary chairman and, in 2000, a Member of Honour of UNIMA International. Metin And served on the Turkish State Theatre Literary Commitee for many years. In 1994, he retired, after teaching at Ankara University, Basın Yayın Yüksek Okulu (1968-1978), Ege University (1976-1977) and universities in New York (1983-1984), Tokyo (1986), and Germany (1987). He wrote fifty books and nearly 1,500 published articles, recieving many awards from national and international societies and communities.