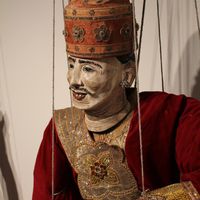 Officially the Republic of the Union of Myanmar (also known as Burma; Burmese: Pyidaunzu Thanmăda Myăma Nainngandaw), the country is situated in South East Asia, between China and India. It is inhabited notably by Burmese, Mon, Shan, and Karen; the majority is Buddhist, but belief in nats, animist spirits, remains strong.

Traditional Burmese puppet theatre (yoke thay) dates from the 15th century. In the 19th century, it reached its peak, after which lighter entertainments became more popular.

A set of string puppets (marionettes) consists of at least twenty-eight puppets. There are pieces of stage scenery, such as a throne; painted backdrops represent the site of the action, forest, or palace. The characters can be humans, animals, or mythical beings. Each puppet has its own way of dancing, accompanied by instrumental music and songs. It is believed that human dancers have copied their movement from the marionettes.

A human figure is made up of eighteen pieces: the head, neck, two body pieces, three arm sections, and four for each leg. The strings, generally eleven, are divided in two groups: five attach to the “H”-shaped control, animating the head, the shoulders and the rump, while the other six (which drape loosely on the control) move the upper arms, thighs, and hands. An interesting detail is that the sexual organs are always carved even though they are hidden by the clothes. The bodies measure between 45 to 70 centimetres and are fashioned from wood that is insect-resistant but light and easy to carve, like yamanay (Gmelina arbor).

The head, hands and feet of the puppet are carved and painted, after which the body parts are assembled. Then the strings are attached to the control, and finally, the character is dressed in the clothes and given his/her proper character attributes. Smaller figures are sold as souvenirs in temple shops.

The name ah myint than, “high performance”, refers to the fact that the puppets perform on a raised platform, and not on the ground as human dancers (ah naint thabin). The manipulators stand on this platform behind a handrail; their lower bodies are hidden by a painted backdrop in front of which the puppets are danced and behind which any puppets not involved in the action are arranged. The performances usually last all night. A company consists of puppeteers, singers and musicians.

A show begins with the appearance of Thagyar Min, King of the Spirits (nat), and the Spirit Medium (Natkadaw) who pays tribute to Buddha and the nat. Then come a number of characters representing the Creation of the World (Himavunta): the White Horse, the Monkey, and two Ogres (City Ogre and Forest Ogre), Zawgyi (alchemist), the Garuda (eagle), and the Naga (dragon), respectively representing the mythic sun and snake (earth/underworld/water), who combat each other. After the chaos of these mythic figures of the creation of the universe, order is represented by founders of the human kingdom, with characters such as the Prince and the Princess, the Ministers, the royal Astrologer, Page Boys and Jesters. In the second part of the performance, a jataka (“birth”) is enacted, one of the 547 stories of lives of the Buddha prior to his enlightenment, and especially his final ten lives are used for puppet performance. These adventures mix kings, princes and princesses, hermits and sages. Each jataka symbolizes a specific virtue such as honesty, wisdom, filial love, etc. A happy ending is mandatory: virtue is rewarded and evil is punished. The performance ends with the duet of the Prince and the Princess, much appreciated by the public. Those two figures, the Natkadaw, and Zawgyi are puppets especially noted for their dancing, and only the best puppeteers manipulate them.

Vocalists, who sing and declaim the text of the complex roles like the Prince and Princess, sit near to the manipulators. They have to be able to sing in varied styles, have a broad knowledge of literature, especially poetry, and deliver the dialogue smoothly.

The orchestra (hsaing-waing) accentuates the dramatic moments of the performance and features a set of tuned drums and a circle of gong chimes, which are supported by shawms and other percussion instruments (drums, cymbals, clappers and a wood block). An overture is played before the performance. The repeated destruction and recreation of the world by fire, wind and water, is represented in this medley by the percussion suspended gong, clash of cymbals, and fast drumbeats.

After Burma was separated from the Commonwealth and gained independence (1948), traditional puppetry troupes diminished rapidly, even though the military regime (from 1962) expressed an interest in puppet theatre, mainly for political purposes. However, with the opening of the country and resultant tourism, interest on the part of the Burmese themselves caused a revival of interest in traditional puppetry in the late 20th century.

A number of older puppeteers are still active, and passing on their knowledge to the younger generation, including U Pan Aye (Mandalay), U Thun Gyi (Yangon, formerly Rangoon), and U Maung Hla (Bagan, also Pagan). U Pan Aye (called “Baba”) is the “star” of the Mandalay Marionettes Theatre, which was built for tourist performances that last approximately one hour. U Maung Hla (“Zawgyi Pyan”) performs on a small stage in the courtyard of his home in Bagan. Younger puppeteers perform so-called “dinner shows” in tourist hotels. Mandalay Marionettes Theatre has performed abroad a number of times, with much success. Their performances in Myanmar have also included religious festivals and government festivals.

Even though the competition from movies and television is great, puppet theatre is still holding its ground, by adapting itself to modern times. Its patrons have changed: they are no longer sovereigns, but often tourists.