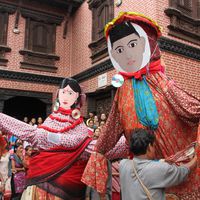 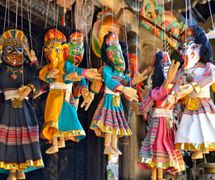 The Federal Democratic Republic of Nepal (Sanghiya Loktāntrik Ganatantra Nepāl) is a landlocked country of South Asia, located in the Himalayas and bordered to the north by the People’s Republic of China, and to the south, east, and west by the Republic of India. Bangladesh and Bhutan are close neighbours.

This discussion will highlight the use of figures in the culture of the Kathmandu Valley, which mixes Hindu and Buddhist images and ideas. Limited large figures and masks may also be used by Nepalis of Tibetan Buddhist heritage whose mask and visual culture spans the Himalaya Mountain region.

Among the Newars the use of masks is more important than puppetry per se and masks of Narasimha (Vishnu in his lion form), the goddess Kumari, and others may be presented or danced at major festivals. When puppet figures are used, the imagery will often correspond to these masks, which echo the paintings of the same Newar divinities: visual iconography is consistent whether it is a painting, danced mask, or small puppet.

Nepal’s best-known puppets (putali) are a type of marionette (string puppet) used by the Newars of the Kathmandu Valley. These puppets are made predominantly on the outskirts of the ancient city of Bhaktapur in the village of Thimi, where woodcarving and pottery are still lively arts. The putali are suspended from wooden manipulation slats by heavy thread secured through the headdress or crown, the back, and the hands. Each figure wears a long, colourful skirt of traditional fabric and, perhaps most interestingly, two masks. By turning the puppet one way, the audience sees one character; when that character turns its back to the audience, the face of another character is revealed, making it possible for one puppeteer to present multiple characters easily and quickly. The heads of the puppets are made out of papier-mâché or clay and are painted to look like the masks used in many theatrical rituals that also include iconic costumes and dance. This relates to the lively mask culture of the Newars that has been detailed by Toffin. The mask-like faces of the puppets are not human or realistic but are shaped and painted to represent familiar deities, such as the elephant god Ganesh, the tantric ferocious god Bhairab, the goddess Durga, and other characters from the Hindu or Buddhist pantheon. In their outstretched hands, the puppets hold emblematic props associated with the deity represented by the mask.

These puppets are sometimes used to teach the stories that are performed by masked dancers at various intervals throughout Newar Nepal at events such as the Baara Baarsa Naach, a ritualized performance that takes place in Newar villages just once every twelve years. Using the puppets, elders enact for children essential belief stories between performance years and keep the images alive in the “off” years. However, the majority of the Newar putali are sold to tourists as traditional handicrafts from this area. Shadow puppets are rare: Toffin, in reporting on the Newar’s annual Indra Jatra Festival, found an old, yearly shadow puppet tradition, but only in Lalitpur.

Large figures are also found in different contexts. Toffin notes that wooden puppet figures called jhyalinca or putali were used in the annual Indra Jatra Festival for a symbolic battle. A warrior figure would be placed outside the palace in Kathmandu. After eight days a dance would be presented and an animal sacrifice held. Then, in a street near the palace, this figure would battle with figures from other quarters of the city in a fight that was both linked with Mahabharata narratives and which might also symbolize the defeat of the Newars by the dynasty which next took over the valley. These figures, however, have not been used for some time. During the Gai Jatra or Cow Festival in the village of Harisiddhi, Toffin saw another kind of giant puppet peculiar to this village and used only for entertainment, called doko pyakhan, with a manipulator again hidden in the giant body. These figures usually are in male-female pairs. Toffin saw another large figure represented, Asmaculi, a legendary figure associated with the Buddhist religious text Prajanaparamitra (Sanskrit: “the Perfection of (Transcendent) Wisdom”), moved to music used during a monastery festival.

Perhaps the best-known large figures are the traditional tahamaca (see Rites and Rituals) in which the figure representing the recently dead person is constructed on a tall bamboo frame with a photo of the dead affixed to the “face”. These images may be carried in procession by descendants of the dead during the Gai Jatra. The activity is traditionally a mode of celebrating and sending off the deceased, but today the parade also includes secular political or popular culture effigies (Uncle Sam) and representation is sometimes satire.

Sometimes, albeit infrequently, large puppets are also used in political street demonstrations in Kathmandu. In May 2010, Maoists called a nationwide multi-day bandh or shut down. In addition to burning piles of tires on street corners, Maoist youth burned large effigies of the “puppet government”.