In the Heart of the Beast Puppet and Mask Theatre 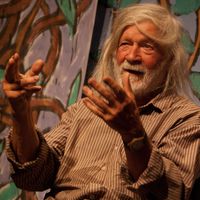 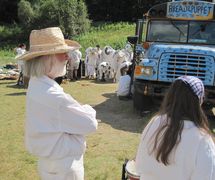 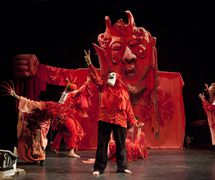 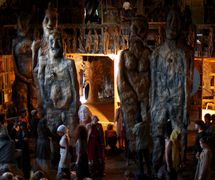 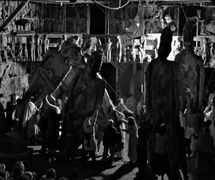 German-born American puppeteer, founder and director of Bread and Puppet Theater.  Peter Schumann was introduced to puppetry and avant-garde theatre from a young age; his family experienced the dislocation and trauma of refugees during World War II.  Puppeteer Max Jacob was a family friend. During Schumann’s early years as an artist in post-war Germany he sculpted and danced; Merce Cunningham and John Cage were major influences. In 1961, Peter and his American-born wife Elka Schumann came to the United States. They quickly became immersed in the avant-garde arts scene in New York City. Schumann’s skills and interest in dance and sculpture were combined in puppetry, and his bread baking and distribution articulated a utilitarian function of art practice synthesized with daily life.

Peter Schumann founded Bread and Puppet Theater in the Lower East Side of New York in 1963. Schumann’s giant puppets, which became the signature of Bread and Puppet, first appeared in 1965 at political street parades in New York City and increasingly as part of the anti-Vietnam War movement. In 1968, Bread and Puppet presented Fire, an understated yet hard-hitting indoor piece about the Vietnam War, to critical acclaim at the Nancy Theatre Festival in France. This launched the theater into international prominence and helped secure over a decade of seasonal touring in Europe and beyond. During this period, Bread and Puppet was often associated with the New American Theater – a loose-knit avant-garde movement that included companies as diverse as the Living Theater, The San Francisco Mime Troupe, Robert Wilson, and others.

Schumann had come to the United States informed in part by the European avant-garde, and in New York was exposed to the Dada-influenced work of John Cage and Merce Cunningham; the early happenings of Claes Oldenburg, Allan Kaprow, Red Grooms, Fluxus; and the Judson Dance Theater. But unlike many of his contemporaries, Schumann’s experimental sensibility was combined with much older forms and traditions: medieval passion plays, the Bible, fairy tales and other folkloric traditions of story telling. Bread and Puppet was also set apart by its economic independence. Guided by a philosophy of living and working within the means available, the Bread and Puppet aesthetic was inextricable from the papier-mâché, burlap, twine, and staples, that made up and literally held the puppets and the shows together.

In 1970, Peter and Elka Schumann and their family relocated Bread and Puppet to Goddard College in Plainfield, Vermont, where they worked as a theatre-in-residence on a farm. Inspired by the Vermont countryside, Schumann began to create giant outdoor spectacles of pageantry, sideshows, and circus acts, which he called Our Domestic Resurrection Circus. In 1974, the Schumanns moved Bread and Puppet Theater to a farm in Glover, Vermont, which became the home of the annual Domestic Resurrection Circus until 1998. With the puppeteers of his Glover company, Schumann also created dozens of significant works performed in the Americas, Europe, North Africa, and Asia.

Hundreds of puppeteers and puppet companies have been inspired by their work with Peter Schumann, including Amy Trompetter, Massimo Schuster, Paul Zaloom, Julie Taymor, John Bell, Sara Peattie, Pedro Adorno, Clare Dolan, Stephen Kaplin, and Roman Paska. The Minneapolis (Minnesota) theatre company In the Heart of the Beast Puppet and Mask Theatre, founded in 1973, was inspired by director Sandy Spieler’s work with Schumann.

Peter Schumann has been awarded Holland’s Erasmus Prize (1978) and the Puppeteers of America President’s Award (1979). He is a UNIMA Member of Honour (1996). Schumann is the author of numerous articles, manifestos, and books, including “The Radicality of the Puppet Theater” (1991) and “What, At the End of This Century, Is the Situation of Puppets and Performing Objects?” (2001). The Bread and Puppet Press, created by Elka Schumann, has printed hundreds of books, posters, pamphlets, and calendars.

Peter Schumann’s Bread and Puppet Theater is recognized as a major force in contemporary world theatre. His pageants with giant puppets and masks presented in the streets of New York City and the hills of Vermont created a radical redefinition of performance as a conscious response to the challenges and inspirations of contemporary life.