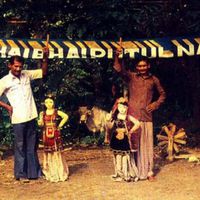 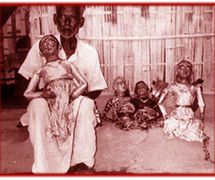 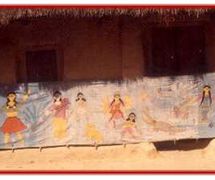 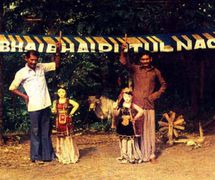 Traditional string puppet theatre of Tripura, a state in north-eastern India, east of Bangladesh. The puppeteers would have come to Tripura many centuries ago from East (now Bangladesh) and West Bengal, where puppet shows go by the name of putul nauch (putul, puppet or doll, and nach or nauch, dance; see Danger Putul Nach).

A putul nach troupe is generally made up of fourteen persons (all men): ten puppeteers and four musicians who play a harmonium, a khol (flute), bells, a sarinda (stringed instrument), as well as sing.

Putul nach performances require a considerable number of puppets (from thirty to forty). They are large figures, sculpted from wood, painted in bright colours and have jointed limbs. They are worked with seven strings (two for the hands, two for the figure/waist, one for the head, one for the upper torso/chest, and one for the back), linked by a bamboo key, the tekathi. The puppets bring episodes of the epic Ramayana to life. Three persons can work the puppets at the same time. Each episode of around forty-to-sixty minutes alternates between invocations to the gods in the Bengali language, and songs sung by the musicians seated in front of the stage.

In between scenes from the epic, the puppeteers slide painted cartoons, measuring two metres in length, behind the dancing puppets, in a series called News. These depict the adventures and misadventures of Mona (“dear chap”), an ordinary person who makes the audience laugh with his antics and topical references to present day events.

Today, there are troupes and traditional families performing putul nach, some of whom are master puppeteers recognized locally and sometimes nationally for their contribution to the art of puppetry.