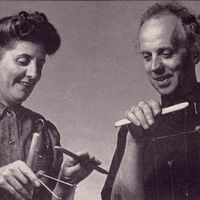 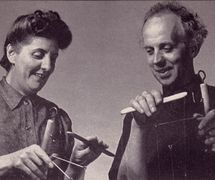 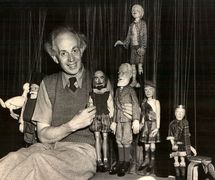 British string puppet (marionette) company founded in 1934 in Malvern, Gloucestershire, by Waldo Lanchester (1897-1978) and his wife Muriel (1901-1992) and which was active until 1949. Waldo Lanchester is the brother of Elsa Lanchester, who played the roles of Mary Shelley and the Monster’s mate in Bride of Frankenstein (James Whale, 1935).

Waldo Lanchester, a master craftsman, had previously founded the London Marionette Theatre (1927-1934), with Harry William Whanslaw (H.W. Whanslaw), founder of the British Model Theatre Guild (later the British Puppet and Model Theatre Guild). At the beginning of the 1930s Lanchester went to live in Malvern, not far from the studio of the potter Muriel Bell whom he later married. In 1937, at the World’s Fair in Paris, the Lanchesters were the first British presence on French television. In 1938 they performed for Queen Elizabeth and her two daughters the princesses Elizabeth and Margaret in Buckingham Palace.

The Lanchester Marionettes gave many successful shows, including Underwater Ballet (1939), Peter and the Wolf, A Trip to Bath (1958), Philemon and Baucis (1952), L’Amfiparnaso (1946), an Italian madrigal opera, and Shakes vs Shav written for them by George Bernard Shaw on the occasion of the 1949 Malvern Festival. They received support from ENSA (the Entertainments National Service Association) and later from the Arts Council of Great Britain. In 1951 the Lanchesters went to live in Stratford-on Avon where they opened a Puppet Centre, a shop opposite the birthplace of William Shakespeare. After this they stopped producing large-scale shows and through the 1960s concentrated on smaller productions, exhibitions and lecture-demonstrations. They retired in 1969. Waldo Lanchester continued to augment his collection of puppets, which became one of the finest in the world. It is now dispersed, but with a number in the possession of the British Puppet and Model Theatre Guild.