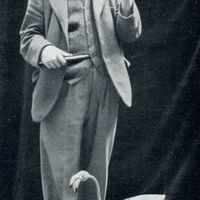 British author, illustrator and puppeteer. H.W. Whanslaw, known as “Whanny”, contributed to the revival of interest in the puppet in Great Britain from the mid-1920s. His book Everybody’s Theatre (1923) led directly to the formation of The British Model Theatre Guild (later the British Puppet and Model Theatre Guild) in 1925 and he remained closely associated with this for the rest of his life. A joint session with Waldo Lanchester (see Lanchester Marionettes) on the occasion of a Guild meeting in 1926 led to the foundation of the London Marionette Theatre, where many techniques of marionette (string puppet) construction and control were developed, and the use of puppets in new fields, such as advertising and television, were pioneered.

During his partnership with Lanchester, Whanslaw recorded many of their experiments in a series of illustrated “how-to” books which inspired generations of puppeteers. He had strong religious convictions and wrote Bible Puppetry and Twelve (Bible) Puppet Plays. In 1935, Whanslaw established the Studio Marionette Theatre in his house in London, presenting regular performances with a team of friends and students. During World War II he worked with the homeless and young people, making puppets from material salvaged from bomb-damaged houses.