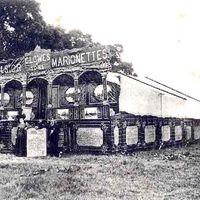 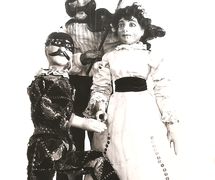 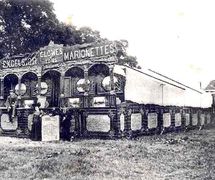 British travelling marionette company created in the second half of the 19th century. The Tiller and Clowes families were among the last to travel with a complete wooden booth with canvas covering, and to present a repertoire of standard melodramas such as Maria Marten or East Lynne. Around 1860 Ambrose Tiller, from Southampton, was hired by the great marionette (string puppet) proprietor, John Simms. In 1863 Simms’ partner was killed while dismantling the booth in a storm, when his widow, Eliza Cheadle, herself a member of a travelling company, became the partner (private and professional) of Ambrose Tiller. Her daughter by John Hunt married John Clowes, who belonged to another well-established theatre company (actors and puppets) from the Birmingham area. Soon there were half a dozen Tiller and Clowes companies active until 1915, although Sid Tiller continued until the 1930s, and Ambrose Tiller II opened a cinema where puppets sometimes provided a complement to the film.

The Clowes were well known as puppet makers, and many of the surviving Tiller marionettes may have been made by them. The last of these is an ensemble of Victorian figures made between the end of the 19th century and the beginning of the 20th. Less realistic than the virtuoso Thomas Holden figures, they were admirably designed for their primary function, to present dramas to predominantly rural audiences. The puppets fall into three groups: the figures for the dramas able to play stock roles; figures for the Harlequinade which always concluded a Victorian pantomime; and trick and variety figures. The average height of the dramatic figures is about 70 centimetres, and the heads are slightly large in proportion to the bodies. They are fully strung, and mostly operated by the English system of two horizontal bars.