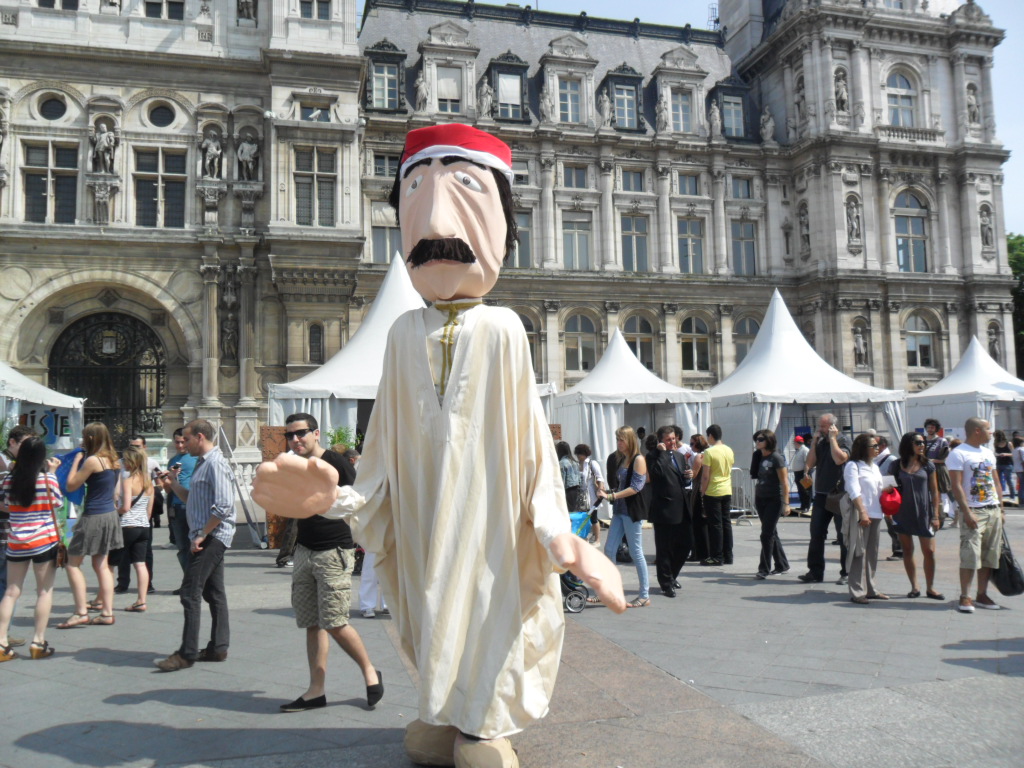 Officially the Tunisian Republic (Arabic: لجمهورية التونسية al-Jumhūriyyah at-Tūnisiyyah), although often referred to in English as the Republic of Tunisia), it is the northernmost country in Africa, bordered by Algeria to the west, Libya to the south-east, and the Mediterranean Sea to its north and east. Its capital is Tunis. Tunisia has close relations with Europe, in particular with France and Italy.

Three principal forms of puppet theatre have existed in Tunisia: shadow theatre, a national variant from the Turkish karagöz called karakouz; glove puppet theatre such as the guignol type brought by the French; and the Sicilian pupi introduced by the Italians.

Karakouz puppet theatre is the most ancient and was probably introduced into the country during the Ottoman Empire (starting from 1570). The testimonies of many travellers show that shadow theatre was commonly seen in Tunisia at the beginning of the 19th century. Around 1820, most shows were performed in Turkish but little by little, as the French presence became more prominent supplanting the Ottoman’s influence, plays were presented in the Tunisian Arab dialect. However, the conditions for performances were less than ideal as the shows could only be performed during Ramadan.

Several reports, one in particular from Myriam Harry (1875-1958) around 1910, show that the Tunisian karakouz was presented under its most salacious aspect – actually obscene with its phallic character well-pronounced – to the public’s great amusement, including children whose “big eyes were riveted to the screen which lit up and revealed the ombre chinoise, or more precisely, the Turkish shadow of this extravagant Karagouz who shows himself from all sides, salutes, slams against the panel and raises high in the air his triumphant private part and the terrifying menace of his old-fashioned Polichinelle stick” (Tunis la blanche, Fayard, 1910). Majid el-Housi, in his work Pour une histoire du théâtre tunisien (A History of Tunisian Theatre), wrote of the character Karakouz: “His virility triumphed over all men and women, the female Turkish bath custodian, the male cook, the couscous vendor …Nature itself underwent his assaults and he struck down trees and rocks with his extremely virile member.”

No one escaped Karakouz’s insults and sarcasms, neither the Bey’s Court nor the French civil servants. His favourite targets of jest were the Jews, often caricatured, and the “Maltese” which represented the Christians in Tunis. Aside from Karakouz and Haziwas (Hacivat in Turkey), the other most popular characters in the repertoire were: Madama, the “European Woman”, the Moorish coffee house hashish smoker, the Quandil cookie vendor “whose only concern is that he wants to be called hadj (a pilgrim who went to Mecca)”, and “the Moroccan”, the country bumpkin. This very popular theatre was located in the Bab Souika Halfaouine neighbourhood of Tunis, inside a shop or a café setup for the occasion. However, just like in Algeria, the French authorities often forbade it even during Ramadan and the closure of entertainment venues then led to the development of clandestine performances (see Algeria).

Guignol, on the other hand, even though introduced before the setup of the French protectorate (1881), was considered by the French as being a useful instrument of propaganda. According to another testimony from that time, fairground showmen “who had the double profession of puppeteer and tooth puller” would show in Tunis a very simple Guignol whose aspect was that of a “ball more or less the shape of an egg, pierced with two holes, one at the base to place the index to support it and the other to hold an interchangeable nose; the eyes and mouth were made of nails or coloured tacks, and the hair was composed of a wig made of wool or horsehair, allowing for multiple principal character changes: Guignol, Madelon and Gnafron, the bailiff, the gendarme … ” (Raoul Darmon, Un presque-siècle de théâtre en Tunisie Almost a Century of Tunisian Theatre, 1951, cited by Moncef Charfeddine).

The first small puppet booth stage in Tunis was created in 1891 by a man called Capus, originally from Lyon, at the Café de la Marine in the angle of the Rue de Grèce; it then moved to the Grand Glacier on the Avenue de France. Opera parodies were performed (L’Africaine The African Woman, Faust, Roméo et Juliet) as well as plays from the repertoire such as Le Déménagement (The Move), Le Pot de confiture (The Marmalade Pot), Le Marchand de veaux (The Veal Vendor) and Le Marchand d’aiguilles (The Needle Vendor), these last were imitations of La Farce de maître Pathelin (The Farce of Master Pierre Pathelin) and Le Bourgeois gentilhomme (The Middle-Class Gentleman).

The opera dei pupi at first catered to the Italian community in Tunis then became a growing success among the French and Arabs. There were thus three pupi theatres in Tunis, one of which was in the Little Sicily neighbourhood. A certain Don Roccia directed one, whereas the pupazzaro Don Nicolao was a very popular figure in Tunis. The Sicilian puppets, which could express themselves in Arabic as well as in Sicilian, were often leased to Tunisian puppeteers during Ramadan and then returned to their Italian public. Their repertoire was that of their country of origin, in particular the the Carolingian cycle – the stories of Charlemagne (French: Chansons de Geste; Italian: Gesta di Carlomagno) – which also had its Arab version with plays that celebrated the exploits of Moorish soldiers against Crusaders, which sometimes took on a comical turn.

For a long time, this pupi theatre performed short plays in Arabic: the “children of Tunis” rubbed shoulders with “Nina, the beautiful Jewess”, the “gallant lady”, the Maltese Nékoula (Nicolas), his knight, and especially Ahmed Pacha, “the valiant warrior whose yatagan short sabre cut off crowned heads and who proudly showed the tableau of the corpses of the kings of Bavaria and Spain”. The “Tunisian Version” of opera dei pupi finally fell into desuetude in the middle of the 1930s.

Several initiatives marked the timid renaissance of Tunisian puppet theatre. In 1968, the Organisation du Théâtre pour Enfants et de Marionnettes (OTEMA; Organization of Theatre and Puppetry for Children) was created under the guidance of Moncef Besbess, who had directed in television, and Béchir Attia, who was a school principal. This first institution played an important role in the training of puppeteers and the dissemination of children’s shows. In 1976, a second goal was achieved for the occasion of the International Children’s Day with the creation, by the Ministry of Cultural Affairs, of a puppet theatre under the successive helm of three highly respected puppeteers: Rached Manaï, Moncef Bel Haj Yaya, and Mohiédine ben Abdallah. The six artists who comprised the troupe produced several shows before going their own way. Among them, Habiba Jandoubi created the puppet troupe called Domia, while Ayed Ben Maakel undertook a vast tour of Europe and the Middle East in search of new techniques and created in 1985 his own company in Tunis, the Théâtre Moderne de Marionnettes de Tunis. Using string, rod and shadow puppets, he performed in elementary schools a series of shows among which were Sabeur et la sirène (Sabeur and the Siren), Le Coq régulateur du temps (The Rooster Controller of Time), Le Mariage de la coccinelle (The Ladybug’s Wedding), and L’Enfant au cœur vaillant (The Child with the Valiant Heart). This travelling artist also toured in France in 1985-1986, participated in the Rabat Festival (1994), the Grenoble Festival (1999) and was the creator of the very first carnival of giant puppets in Tunis.

The first of the Rencontres Internationales de la Marionnette de Sfax (Sfax First International Puppetry Summit) was organized in 2003 with the collaboration of the French Institute of Cooperation. With the help of the Ministry of Culture and Heritage Preservation, the embassies of Germany, Great Britain, Spain, the Netherlands, Italy and France, these meetings have since then gained in importance. Through contemporary Tunisian and European works, this festival showcases theatre arts, visual arts and string, rod, glove, marotte, and shadow theatre performances, as well as object theatre shows. Two other puppetry festivals take place in Djerba and Nabeul.

There is also the Centre National de l’Art de la Marionnette de Tunis (formerly called the Théâtre de Marionnettes de Tunis) and the work of the Centre National des Arts de la Marionnette du Kef, which notably presented in 2004, in conjunction with the Theater Junge Generation (TJG; Theatre of Young Generation) of Dresden, an acclaimed highly visual adaptation of Ovid’s Metamorphoses entitled Aliha wa Bachar (Deities and Men), directed by Heiki Ikkola, with a text spoken not only in German and Arabic but also… in Latin.