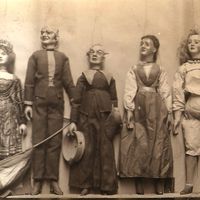 British string puppet company of the second half of the 19th century whose proprietor was Lambert D’Arc (1824-1893), who also owned an exhibition of waxwork figures. Lambert D’Arc began his career as a showman during the 1860s, opening his marionette show in 1868 in Dublin, which remained his base for several years, producing marionette shows based on popular stories such as Blue Beard and Babes in the Wood. During the 1870s, the company toured pantomimes and spectacles throughout Great Britain, including a season in Liverpool where he met William Bullock (see Bullock’s Royal Marionettes). The company continued to tour both in Great Britain and Europe during the 1880s and, in 1884, opened the Grand Waxwork Exhibition, Cosmoramic Views and Waxen Marionettes, at the Victoria Rooms, Cardiff, where the waxwork exhibition remained in D’Arc’s name until 1931. The repertoire during this decade included Bleak House, or Poor Joe, adapted from Charles Dickens.

Between 1889 and 1893, the company was frequently invited to perform overseas and toured South Africa, Australia and India. After Lambert D’Arc’s death in 1893, the company continued to tour the Far East and Asia, even inspiring a Kabuki company in Tokyo to produce a show based on string marionettes in the English style.

Lambert D’Arc did not manipulate the marionettes himself, but his children were both performers and managers of the company, along with Madame D’Arc, Lambert’s wife, who died in 1936.