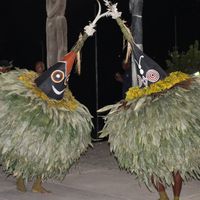 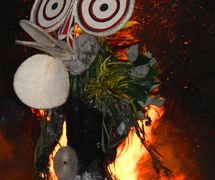 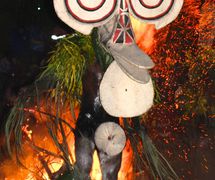 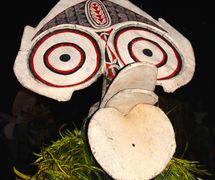 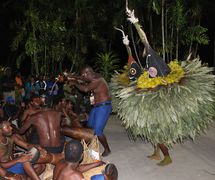 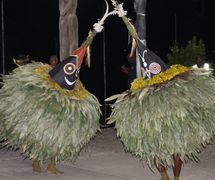 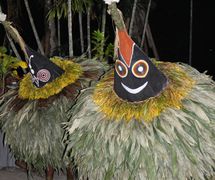 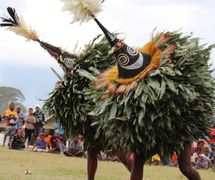 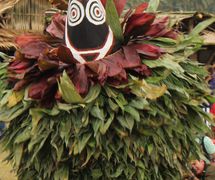 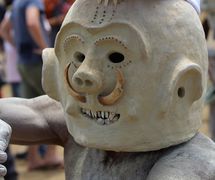 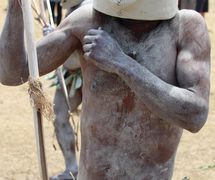 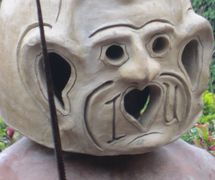 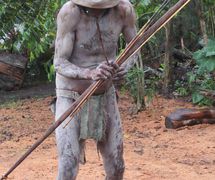 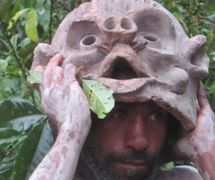 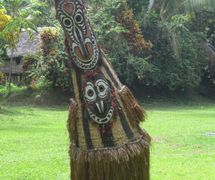 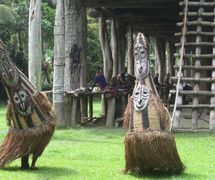 Before the arrival of Europeans there seems to have been scant use of puppetry by indigenous societies of Oceania. The Aborigines of Cape York in Australia used wooden carvings to represent animals and fish in dances based on myths, and one would expect similar usage in other cultures, especially those with a rich tradition of masks.

On Malekula Island in Vanuatu (the former New Hebrides) there was a form of rod puppet (temes nevimbur) used in plays at secret ceremonies. Hidden puppeteers held the figures above their heads to convince spectators the figures had lives of their own. The fragile heads were modelled from a vegetable paste over a base of a coconut or bundle of leaves set on the end of a stick, and the figures were finally destroyed as part of the ritual.

Hawaii had one kind of puppet figure made up of a separate head, whose neck fitted into a hollow torso, and separate tubular arms. Cords through the arms ran into the torso and tapa (bark cloth) around the base of the figure hid the puppeteer’s hand as he moved the neck and arm-cords. Such figures were being made well into the 19th century and there is a likelihood that they may have existed before Captain Cook’s arrival.

There is better documentation, from 1820 on, for a second type of puppet which was used in hula ki’i (“image dance”), dances or plays performed purely as entertainment by simple puppets worked from behind a tapa screen. Figures have wooden heads and torsos made in one piece, with arms joined to the bodies with fabric hinges. The arms are worked by the hands of the puppeteers, concealed by the costume of the figures. This Hawaiian puppetry tradition, with some influence from the content of visiting puppet shows, was being kept alive late into the 20th century by the occasional hula master in rural areas.

The Maoris of New Zealand (Maori: Aotearoa; thought to have originally come from Hawaii) had a form of puppet (karetao) which is believed to predate European settlement. Head, body and legs are carved in one piece with a short handle below the feet. The jointless arms are attached by cords through the shoulders which are joined behind the figure. Movement could be given by shaking the figure and tugging the cords. Male and female figures survive but there is no known record of their exact use.

Following colonization by Europeans, developments in puppetry in Oceania were initially influenced by the puppetry of Great Britain and the United States of America, especially in the British colonies (now states) of Australia and New Zealand. There are references to fantoccini (English marionette or string puppet variety) and mechanical theatre in Australia from the 1830s, and the possibility of a Punch and Judy show as early as 1824.

McDonough and Earnshaw’s Royal Marionettes from the United States were in Honolulu in late 1874, and Walter E. Deaves brought his marionette show there in 1884. The anthropologist Katharine Luomala observes that both companies had less impact on the locals than a young ventriloquist from Australia, Fred W. Millis, who performed in 1886 with six doll characters. His performance possibly inspired King Kalakaua to include a hula ki’i by six royal puppets in his 50th birthday celebrations later that year.

In 1875-1876, McDonough and Earnshaw’s Royal Marionettes undertook a year-long tour of four of the Australian colonies (which became states in a federation in 1901) and New Zealand. Their show had originally belonged to William J. Bullock of England (see Bullock’s Royal Marionettes) who had bought it from Lambert D’Arc (see D’Arc’s Marionettes), and comprised fantoccini, a minstrel show and a pantomime. The impact of this tour was made greater by the fact that three of their puppeteers, Mr and Mrs Charles Webb and Charles Trotter, left to form their own company of Royal Marionettes to tour in Australia and New Zealand. Both Webb and Trotter were grandsons of the English puppeteer Charles Middleton. As a concession to their new colonial base one of the black minstrel characters was named Mr Kauri after a New Zealand tree but otherwise the show was very like the one they had left. In the decade from 1873, Charles and Jane Webb, with Charles Trotter, circumnavigated the globe, performing in five continents.

In 1892, Lambert D’Arc came from Cardiff, Wales to Australia via South Africa with a similar marionette show advertised as Fantoches Françaises. He came with his six children and toured in eastern Australia and also to New Caledonia. Most of their equipment was destroyed by a fire in Cooktown in far northern Queensland where they remained for the first half of 1893 to rebuild. Lambert D’Arc died on Thursday Island, but his children went on to perform in Java, Singapore, India, Korea, China, and Japan. The show was taken over in Asia in about 1900 by a Melbourne man, F.T. Barrass, who toured it in Australia and New Zealand from 1902 to 1904. He later performed a solo marionette show in these two countries and in Fiji.

In 1907-1914, on a worldwide tour, Deaves’ Marionettes performed in Australia and New Zealand and also in Hawaii (which had been annexed by the United States in 1898), Samoa and Fiji.

From the early decades and well into the 20th century, puppets in Australia and New Zealand were mainly marionettes from England or the United States (or local versions of them), and Punch and Judy shows. The local beginnings of a distinctive modern puppetry in these countries dates from the late 1930s, with the Goodwin Marionettes, directed by Arnold Goodwin in New Zealand in 1937 and the smaller marionette enterprise of Kay and Allan Lewis in Australia in Sydney in 1936.

Sometimes Europeans have worked with indigenous people to create puppet shows.   Oliver Sublette, an American who eventually settled in Australia, directed New Guineans in a glove puppet play in Pidgin and a marionette (string puppet) version of one of their local stories in English. These were presented at the 2nd South Pacific Arts Festival in Rotorua, New Zealand in 1976. W.D. Nicol (1907-1978), a retired lecturer in art and craft from Melbourne Teachers’ College, introduced puppetry to Kormilda College in the Northern Territory of Australia in 1968-1969. Aboriginal students from different tribes and language groups made marionettes with their own individual tribal markings, and performed shadow puppet versions of their own legends.

Elsewhere in the Pacific islands modern puppetry has developed under the influence of outside sources. French puppeteers have visited the French territories of Tahiti and New Caledonia and some have become residents and created shows there. In Tahiti puppet shows sponsored by the Maison de la Culture have used themes from Polynesian culture performed by locals. Similarly, puppeteers from mainland United States have worked in Hawaii, a US state since 1959. For many years Tamara Montgomery has supervised courses in puppetry at the University of Hawaii, and students have sometimes based their shows on Hawaiian legends. She has also taught in American Samoa.

The Polish-born Sunhild Hampson (1914-2002), who grew up in Austria and trained with the Hohnsteiner puppeteers of Germany under Max Jacob, moved to England after World War II. She performed with glove puppets and shadow puppets, assisted by her English husband, Charles. From 1952, they were based in New Zealand and Australia and finally, in 1962, moved to Hawaii where they gave performances until Charles’s death in 1990.

Puppetry has been employed by missionaries to the Pacific and the Mormons have used puppets to tackle health problems in Samoa, Fiji and Tonga. In 1997, the Fiji Red Cross began a puppetry-in-education project in Suva led by Temo Sasau, which became known as “Puppets for Peace”. Programs have dealt with drug use, health issues (including sexually transmitted disease and HIV/AIDS), disaster preparedness and environmental issues. In 2002, the project was extended to involve Red Cross volunteers in Tonga, Samoa, Vanuatu and the Cook Islands. In 2003, the Australian Red Cross invited the South African-born puppeteer, Gary Friedman, to Suva to give a workshop and provide professional advice.