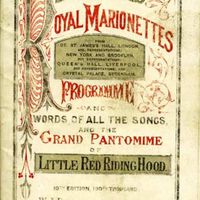 British marionette company active in the 19th century. William John Bullock (1832-1882) enjoyed a short but successful career as a marionette show proprietor. It must be that he had enjoyed a far better education than most of his competitors. This enabled him to project an aura of respectability beyond that of the music hall and fairground showmen who were his contemporaries. A full bill was always presented by his company during his lifetime and it was only after his death that this Royal Marionette troupe, for there were many similarly named, shared its billing with other acts.

Bullock was trained as a schoolmaster and entered Cheltenham Normal College in 1848 at the age of sixteen where he remained for two years. He was Lessee of the Queen’s Hall, Bold Street, Liverpool, in the spring of 1872 when Lambert D’Arc was presenting his marionettes there and receiving “capital support”. For some unknown reason D’Arc arranged to sell his show to Bullock (a decision D’Arc was later to regret deeply) and returned to Dublin leaving Bullock to rename the company “The Royal Marionettes” (see D’Arc’s Marionettes).

Although it seems that he had no previous involvement with marionettes, Bullock recognized their financial potential and proceeded to exploit it. Within a very short time he arranged a London showing at the prestigious Great St. James’s Hall, Piccadilly, where he opened on July 23, 1872, with a programme of fantoccini, Christy Minstrels and Little Red Riding Hood, which received wide and enthusiastic press coverage. At the end of October, the show later transferred to Albert Smith’s Room at the nearby Egyptian Hall where it remained until the spring of 1873. During the following tour of the English provinces it visited Norwich, Ipswich, Colchester, Congleton, Chester, Runcorn, Warrington, Hyde, Sheffield, Rotherham, Wakefield and Cambridge.

In September 1873, a second company of Bullock’s Royal Marionettes crossed the Atlantic and opened at Robinson’s Hall in New York, under the management of McDonough and Earnshaw. In November, they played at the Brooklyn Atheneum before going on to the Newark Opera House. Bullock left this company in Philadelphia and sailed for England, having given power of attorney to Joseph McLaren of Edinburgh who had lately arrived in New York. The troupe went on to Washington, Baltimore and Harrisburg. It was here that an argument erupted between McLaren and McDonough and Earnshaw over responsibility for the running of the show which resulted in a split which saw six members of the company (including Thomas Holden) opting to leave Bullock’s employment to work for McDonough and Earnshaw.

Bullock’s company at home was performing at the Crystal Palace (February 16-28, 1874) but on hearing the news he hurried back to the United States bringing a second company, and he and McLaren continued to tour America separately during May and June.

At the beginning of July 1874, Bullock returned to England with both companies, one going to the Queen’s Hall, Liverpool, to perform Bombastes Furioso, and the other to resume touring through the provinces.

Bullock continued to tour England for the next four years but his show was totally burnt out when appearing at the Town Hall, Altrincham, in November 1878. At this time he had only one company on the road, and no further performances were given before his death at the age of 50, in June 1882. Despite his prominence in the history of puppetry Bullock was not a marionettist himself and was active as a marionette proprietor for only just over six years. After his death, attempts were made to resurrect the company and resume touring under the management of his children, but although there were occasional performances during the three following years the company was dissolved and the marionettes dispersed.