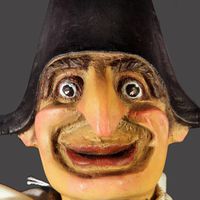 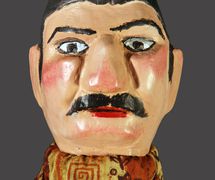 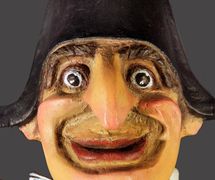 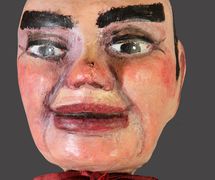 Spanish puppet character. Don Cristóbal is the Spanish version of the Neapolitan Pulcinella and the French Polichinelle. As such, he is the principal character of traditional Spanish glove puppet theatre.

John Earl Varey, a scholar of Spanish literature, believes that the Italian “purchinela” did not initially attract the attention of Spaniards who, during the 17th and 18th centuries, were fascinated by the Máquina Real (literally, “royal machine”) in which works of the most important poets of the Golden Age were represented entirely with puppet actors. But public interest was to change.

One of the first works to mention Don Cristóbal was Ramón de la Cruz’s Las tertulias de Madrid (The Social Gatherings of Madrid) dated 1770. In this work Don Cristóbal appears in a sainete, a farcical sketch of city life, together with a cast of other characters – the devil, the dog, and the señora – similar to other European Polichinelas, such as Pulcinella, Polichinelle, Punch, and Kasper. In 1790, the Spanish essayist and writer, Gaspar Melchor de Jovellanos (1744-1811), attacked the bad influence that this character was exerting on the people with his rude, tyrannical and quarrelsome nature, always armed with his cachiporra (billy club). This kind of show was far removed from the new pedagogical values that were being espoused at the time to reform theatre, a policy which Jovellanos supported.

We do not know if the origins of this character can be traced to Andalusia, but it was undoubtedly there that Don Cristóbal was best adapted. The first descriptions of the character speak of a red coat and the presence of bells. This indicates a clear French influence. In time this Andalusian character became portrayed with thick sideburns in the style of mountain bandits. The contemporary press describes his constant presence in the booths of the feria de Sevilla (Seville Fair) throughout the 19th century. Indeed, 19th century chronicles identify Juan Misa, el Sevillano, and Antonio, el Picardías, of Córdoba as two of Don Cristóbal’s best-known presenters. Recently, Juan Manuel Benito recovered materials describing the productions of another Andalusian puppeteer from the Ronda (Málaga) area. Antonio Durán was active from 1900 to 1953, and the plots of his Don Cristóbal’s have a familiar ring – romance and quarrels with Doña Rosita, confrontations with local rowdies, brawls with the priest who tries to charge him for Rosita’s burial …These storylines provided a loose structure, but the improvised dialogues of the puppeteer with Don Cristóbal and with the public were of equal importance to the performance. So popular was this character that many Andalusians gave the puppets a generic nickname, “cristobitas”.

Two puppeteers who brought Don Cristóbal to the streets of Madrid include José Vera, a native of Cartagena (active 1917-1936), as well as a former lion tamer, Félix Malleu (active 1918-1930), who was known by playwright Federico García Lorca and filmmaker Luis Buñuel. In fact, while there were many puppeteers who made this character the leading figure of their puppet shows, it was García Lorca who made the character he calls Cristobita or Cristobícal a world famous literary figure.