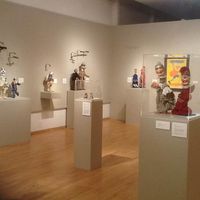 American museum of puppetry from the collection of Alan G. Cook, in Pasadena, California. The International Puppetry Museum (IPM), formerly the Conservatory of Puppet Arts (COPA), was established in 1999 by a group of puppeteers, producers, business professionals, and lovers of puppetry who came together to form a steering committee. The goal was to create a non-profit centre in Southern California that promotes and preserves puppetry arts. Alan Cook, a UNIMA Member of Honour, is the director of the museum.

The puppet collection of Alan Cook covers every aspect of the art form. His collection is over 5,000 puppets. China, Taiwan, Sri Lanka, Indonesia (Java and Bali), Burma, Turkey, and Greece are all represented as well as puppet characters, including Punch and Judy sets, Guignol, Kasper, Sicilian pupi rod marionettes. The museum collection is especially rich in American puppetry.

One of the many highlights of the collection is a large group of vaudeville marionettes (string puppets) from 1910 to 1930 used by Len Ayers (The Mantell Manikins). Other artists in Alan Cook’s collection include: Bil Baird, Bob Brown, Harry Burnett (Yale Puppeteers), Art Clokey, Donald Cordry, Jewell Manikins, Roberto Lago, Frank Paris, Tony Sarg, Blanding Sloan, Martin and Olga Stevens, the Tatterman Marionettes, Walton and O’Rourke, Tony Urbano, George (Pinxy) Larsen, and many others.

Alan Cook has mounted many exhibits, the largest featuring over 700 puppets. The International Puppetry Museum has created an outreach programme that brings puppet shows and activities to various locations throughout Southern California, and an ongoing restoration programme to catalogue and preserve the Alan G. Cook International Puppetry Museum collection in the United States as well as the work of other major puppet artists. Partnering with the Armory Center for the Arts (Pasadena, California) as well as developing its own programmes, IPM develops creativity through the building and use of puppets. IPM has developed a library and archive of the history of puppetry, and a news centre where activities about puppeteers and puppet related events are collected, distributed and exchanged, including a newsletter and a web page (puppetrymuseum.org).

IPM will continue as a non-profit organization (NGO) in Southern California to help promote puppetry in the South West of the United States and add to the collection. Luman Coad (founder and literary director of Charlemagne Press; see Coad Canada Puppets) is currently editing a book about Alan Cook, focusing on his American collection.