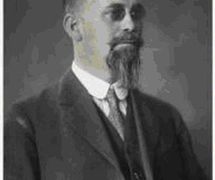 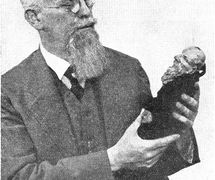 Editor and historian of Czech puppet theatre. In 1908, Jindřich Veselý graduated from the Faculty of Philosophy at the Charles University in Prague with his thesis, “Faust v české literatuře” (Faust in Czech Literature). While employed as a secondary school teacher, he devoted his spare time to puppetry. Initially he collected puppets, manuscripts of old puppet theatre plays, and documents on Czech showmen of the 19th century, particularly Matěj Kopecký.

Veselý’s research into Czech puppet theatre resulted in a number of publications, among them Johan doktor Faust českých loutkářů (Doctor Johan Faust of the Czech Puppeteers, 1911), Z historie loutek evropských (From the History of European Puppets, 1913), Bramborové divadlo, jeho historie a praktický návod (The Potato Theatre. Its History and its Practical Instructions, 1913), Komedie a hry podle starých rukopisů, loutkářských tradic a Matěje Kopeckého (Comedies and Plays from Old Manuscripts, Puppetry Traditions and Matěj Kopecký, Volumes I-IV, 1927-1930), as well as numerous studies in academic journals, in particular Loutkář (Puppeteer). His work and writings were the source of historical research on the Czech puppet theatre.

Jindřich Veselý also took a keen interest in contemporary amateur puppet theatre, serving as a key initiator of its modern development. In 1911, he organized a major retrospective exhibition of Czech puppets that sparked public interest for the genre. In 1912-1913, he launched the magazine Český loutkář (Czech Puppeteer), which became one of the reference publications on this art in Europe. In 1917, the journal appeared under the name Loutkář (Puppeteer). Under his editorial leadership the journal became a very important platform and means of expression for Czech puppeteers.

In 1911, Jindřich Veselý participated in the establishment of the Český svaz přatel loutkového divadla (Czech Association of Puppet Theatre Friends). After its demise in 1923, he headed an association of puppeteers called Loutkářské soustředění (Puppet Concentration), which supported the founding of new companies, the organization of puppetry courses, the exchange of experience, as well as contacts with foreign artists. He also participated in the creation of the Union Internationale des Marionnettistes (International Union of Puppeteers) in Prague in 1929, which in time became Union Internationale de la Marionnette (UNIMA). He served as the organization’s first president until 1933.