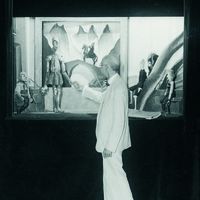 In 1918, Winnaretta Singer, the Princesse de Polignac, commissioned Falla (along with Igor Stravinsky and Erik Satie) to write an orchestral work reduced to just a few characters that could be staged in the elaborate puppet theatre in her palace salon. Falla wrote a libretto for puppets, El retablo de maese Pedro, based on Chapters 25 and 26 of the second part of Cervantes’ Don Quixote, which depicts a puppet play. He was perhaps also inspired by the traditional puppet shows performed by the theatre La Tía Norica in Cádiz (his brother Germán Falla reported this connection to the folklorist, Arcadio de Larrea, who recorded the story in the Revista de Dialectología y Tradiciones Populares Journal of Dialectology and Folklore in 1950).

A number of other artists then became engaged in the production of El retablo de maese Pedro. The development of the design of the play was a collaboration between Paris and Granada with Manuel Ángeles Ortiz, Jose Viñes Roda and Hernando Viñes for set, figurines, and design of the “retablo”, Hermenegildo Lanz González for the design and manufacture of puppets, and Mme Lazarski for costumes.

The full score was performed at the Teatro San Fernando in Seville on March 23, 1923. For this recital, Falla and his collaborators created the Orquesta Bética de Cámara (Chamber Orchestra of Andalusia). The complete show was first presented on June 25 at the Parisian home of the Princesse de Polignac. Subsequent performances took place in Seville on January 31, 1925, and later that year in Barcelona and Zurich. In the spring of 1926, it was performed at the Opéra-Comique in Paris with new designs by the Spanish painter Ignacio Zuloaga. On April 26 it was performed in Amsterdam under Luis Buñuel’s stage direction, and on December 17 in Cádiz, in the theatre that now bears the composer’s name.

Since its creation, the play has been produced around the world – from New York to Venice, and at the Universal Exposition in Seville in 1992 – with various directors and “maestros”, from Pablo Sebastián to Barceló, from Maese Villarejo to Francisco Peralta.  Each version has assumed its own unique style and aesthetic. However, possibly the most moving staging was that presented by the company, La Tía Norica, on November 24, 2001 with the Manuel de Falla Orchestra on the composer’s 125th birth anniversary.