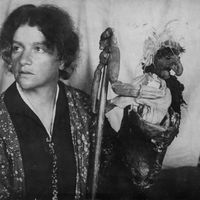 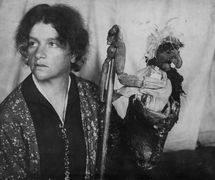 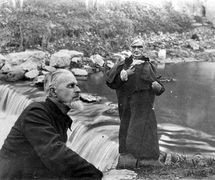 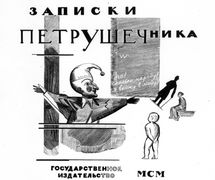 One of the founders of the Russian professional puppet theatre, an artist, educator, and writer. In 1918, Nina Simonovitch-Efimova and her husband, the sculptor Ivan Efimov (1878-1958), founded the first children’s puppet theatre repertory in Moscow. Everything – from folding screens to the puppets to the curtain – was handcrafted by the artists themselves, who also doubled as directors and performers. Aside from their permanent stage, they used to perform outside of Moscow, at workers’ clubs, railway stations, river ports and hospitals.

The Efimovs’ Teatr Petrushki (Petrushka Theatre) followed traditional Russian puppetry by employing the glove puppet and in preserving the priority of movement and the dominance of gesture over the spoken word (see Petrushka). At the same time their repertoire was constantly expanding (introducing the works of William Shakespeare, Giovanni Boccaccio, Aleksandr Pushkin, Ivan Krylov), and the glove puppet was modernized. Nina Simonovich-Efimova studied the psychological impact of the performances and audience’s perceptions of puppet theatre, summing up her experience, knowledge and thoughts in the book, Zapiski petrushechnika (Notes of the Petrushka Puppeteer, 1925), the first ever study of the Petrushka theatre in Russia. In 1935, the book was translated into English, published in the United States as Adventure of a Russian Puppet.

After having seen a collection of Indonesian puppets (wayang) at a museum, the Efimovs invented a rod puppet of their own design (the so-called “elbow rod puppet”). It soon was used by many Russian puppeteers, and after World War II shown in Europe by the Sergei Obraztsov Central Puppet Theatre (later to be renamed Gosudarstvenny akademichesky tsentralny teatr kukol imeni S.V. Obraztsova, the Sergei Obraztsov State Academic Central Puppet Theatre). Since then it has been used by many puppeteers around the world. The invention was patented in 1935, and the couple published the essay, Kukly na trostyakh (Rod Puppets), in 1940. Their search for adult repertoire peaked with their 1931 production Makbet (based on William Shakespeare’s Macbeth), a landmark production of rod puppet theatre.

Experimentation was central to Nina Simonovitch-Efimova’s work. She was deeply involved in the silhouette and shadow theatre, and she dreamt of creating a new art form that she would call “shadow and music”. As a designer at the Central Ethnography Museum, she came up with a “dynamic display” of objects of material culture.

Nina Simonovitch-Efimova was the first to recognize the specific nature of puppet theatre itself in general and in its particular versions, each with its own laws. She pioneered the view that each puppet had to be regarded on an individual basis, singled out by its material, its texture and the method of manipulation.

Nina Simonovich-Efimova is the author of many articles and essays about puppetry and puppet training manuals. Her best-known writings are in the collection, Zapiski petrushechnika i statii o teatre kukol (Notes of the Petrushka Puppeteer and Essays on Puppetry, 1980).