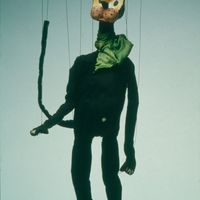 American puppeteer and puppet theatre historian. Paul McPharlin was born in a wealthy suburb of Detroit. He became enamored of puppetry while a student at Columbia University in the early 1920s, and puppetry would be at the centre of all his interests and activities throughout his life. His family’s wealth freed him from the day-to-day pressures of making a living and he thus had the time to develop his talents in many areas. He loved books and all the arts and crafts associated with producing them – writing, illustration, photography, typography, printing and binding. For the next two decades he would combine his love of books and puppetry, to the great benefit of generations of puppeteers and scholars to come. Paul McPharlin became one of the most important figures in American Puppetry in the 20th century. Although he was a practising puppeteer, building and performing seasons of shows in the 1920s and 1930s, his major contributions were through his work as historian, writer, researcher, communicator and publisher.

During the 1920s, puppetry was emerging from the cocoon of secrecy that had kept aspiring artists and performers from learning how it was done. McPharlin would further the education process through his own publication of a series called Puppetry Imprints –generally small, thin volumes that ranged from technical books, such as Trick Marionettes by Nicholas Nelson and J. J. Hayes, to books of puppet plays, some of which McPharlin wrote himself under the pseudonym, Edgar Caper. However, it was under his own name that he published A Repertory of Marionette Plays (1929).

In 1929, UNIMA (which would become Union Internationale de la Marionnette) was formed in Europe, in Prague. McPharlin and a friend set out to organize an American chapter, the Marionette Fellowship, and McPharlin produced his first annual Puppetry Yearbook (1930) intending it to be the Fellowship’s official publication. Although the organization failed to materialize, McPharlin continued to publish Puppetry: A Yearbook of Puppets and Marionettes for almost two decades (1930-1948). As documents of what was happening in the development of American puppetry in the 1930s and 1940s, they are invaluable and irreplaceable.

His vision for an organization of puppeteers did not die with the Fellowship. In 1936, Paul McPharlin organized a conference in Detroit, and discovered among the puppeteers who attended a hunger for a national body through which they could communicate with each other. The result was the founding of the Puppeteers of America, with McPharlin as its first honorary president.

Through much of his career he had worked closely with puppeteer and teacher Marjorie Batchelder, and, in 1947, they finally married. Just a few months later McPharlin was diagnosed with a brain tumor and died shortly thereafter.

At the time he was finishing his major work, The Puppet Theatre in America, into which he poured his vast knowledge of puppetry in America and its roots in other cultures. Marjorie Batchelder would go on to complete the work and have it published in 1949, and, in 1969, it was republished with a supplement by Marjorie Batchelder McPharlin, covering 1948-1968. More than a half-century later, it is still one of the key reference works for puppeteers and puppetry historians.

In 1952, the McPharlin family and Marjorie Batchelder McPharlin donated Paul McPharlin’s collection of theatre materials and about 274 puppets to the Detroit Institute of Arts. The collection would grow to more than 650 puppets by the mid 1990s.