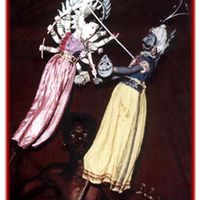 Traditional rod puppet theatre from the state of Orissa (today, Odisha) located in the east of India. The puppets of kathi kundhei nacha (“wooden-rod puppet dance”, also called kandhei nach or kandhei nata) are manipulated by a kathi, or wooden rod. The traditional performance, an amalgam of dance, drama and songs, begins with an invocation (stuti), followed by the sutradhara (stage director/narrator) introducing the episode to be enacted from the epics, the Ramayana and Mahabharata, or from the Puranas.

Puppets are up to 60 centimetres in height, carved, painted, and costumed in the Orissa style of jatra (operatic theatre), with full skirts and shirts. The puppets are joined at the shoulders, and the shoulder joints are connected with strings inside the torso of the puppet to two rings, which are pulled to move the characters’ arms. The rod holds up the head, which is carved in wood and painted. Puppeteers sit on the ground behind a screen. Musicians play drums, cymbals, and reed instruments, including the Indian clarinet and flute, and more recently a harmonium, while a multi-person group manipulates. Today, the staging can be more elaborate, performed in a booth stage with a curtain and painted backdrops, similar to the West Bengal danger putul nach stage.

Maguni Charan Kuanr (b.1937) is currently the best-known exponent of kathi kundhei nacha. He learned this form of traditional puppetry from his father, Baishnab Charan Kuanr, and from members of the Jhara community in his village in Keonjhar district, Orissa. He has improvised within the genre over many years with his company, Utkala Biswakarma Kalakunja, developing, in the process, what could be called kathi-suta kandhei nacha (“rod and string puppet dance”). A representative performance of his could begin with a short piece, Mahishasura Mardhana, where the goddess Chandikar (Durga) kills the buffalo demon Mahishasura, followed by the chosen episode from the Ramayana. The group addresses modern themes as well as performing the traditional repertoire based on the Ramayana and other mythic sources. Comedy is a fundamental element. Humorous puppetry items – such as the sapua kela, the overenthusiastic snake charmer blowing his double-reed flute, attacked by a proliferation of cobras, or the snoring drunkard sprawled under a tree urinated upon by a passing dog, or the couple debating the respective spending habits of modern men and women – are interspersed throughout the main drama to provide comic relief. Nevertheless, in spite of popularity among his local audiences and official recognition nationally from the Sangeet Natak Akademi for his contribution to the art of puppetry, Maguni Charan Kuanr notes: “Sadly, the art form again awaits passionate puppeteers who could save it in the age of television and cinema.”

Today, some traditional performers are recognized in their communities and sometimes nationally for their contribution to the art of puppetry. In 2004, Maguni Charan Kuanr was the recipient of the Sangeet Natak Akademi Award for his contribution to kathi kundhei nacha and to Indian puppetry.