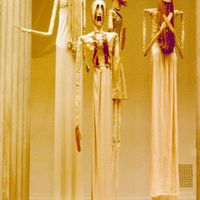 American museum in Detroit, Michigan, with a significant puppet collection. In 1952, to honour the memory and contributions of Paul McPharlin, his family donated 274 puppets to the Detroit Institute of Arts (www.dia.org). This collection now includes over 1,000 puppets, plus many props, backdrops, stages, and puppet heads.

Few puppets are on exhibit. The collection gets excellent care in state-of-the-art storage. To accompany an exhibit in 2000, the catalogue by John Bell, Stings, Hands, Shadows, has over 150 full-colour photographs of puppets in the collection.

The first curator of the puppet collection was Adolph Cavallo, followed by Gil Oden and Dr Audley Grossman. The current curator (2012) is Larry Baranski.