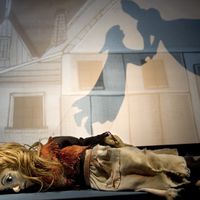 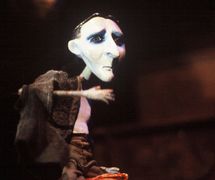 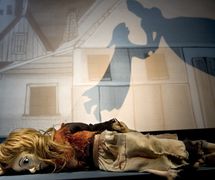 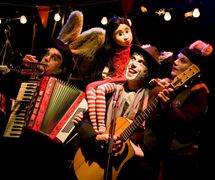 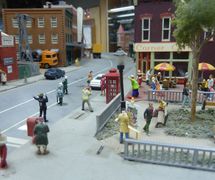 Australian company founded in 1981 in Hobart, Tasmania by Jennifer Davidson (1929-2004) following the collapse of the Tasmanian Puppet Theatre in 1979. Terrapin Puppet Theatre received financial support from the Tasmanian Arts Advisory Board, but initially Davidson received no wages and lived on a widow’s pension. Her first production was The Soldier’s Tale (1981), and this was followed by many small shows that toured to schools in Tasmania.

Jenny Davidson had trained as a theatre designer in England before emigrating to Tasmania in 1960. She was recruited from teaching art to become resident designer and puppet-maker for the Tasmanian Puppet Theatre. Her large figures for Nigel Triffitt’s Momma’s Little Horror Show (1976, see L. Peter Wilson) were particularly memorable.

In 1984, Jindra Rosendorf, formerly of Divadlo DRAK (DRAK Theatre, former Czechoslovakia), became Terrapin’s resident director. Noriko Nishimoto of Spare Parts Puppet Theatre was a guest director for some shows. In 1985, Canadian Greg Methé was studying Architecture in Hobart when Davidson invited him to design for Terrapin. He continues to design for the company.

In 1992, Jennifer Davidson retired, and Annette Downs, with a background in dance theatre, succeeded her as Artistic Director. Downs continued the school shows, but also created some large theatre shows, such as the programme, Desires, that the company presented at the 1996 UNIMA Congress in Budapest, and toured Little Red to Korea and Taiwan. She was a mentor for Philip Mitchell who became artistic director of Spare Part Puppet Theatre. Sue Giles, who became Artistic Director of Polyglot Puppet Theatre, was also with the company at that time.

In 1999, Annette Downs was succeeded by Jessica Wilson, founder in 1994 of the Brink Performance Company of Brisbane (Queensland). Jessica Wilson created The Dark at the Top of the Stairs (2000), based on the work of Australian playwright Noëlle Janaczewska, as a theatre piece for adults.

In 2004, the Board of Terrapin Puppet Theatre appointed Anne Forbes, a puppeteer from New Zealand, as its new Artistic Director. Forbes created The Storyteller’s Shadow: A Celebration of Hans Christian Andersen, and The Legend of Ned Kelly. She was also responsible for the hosting of the 2nd National Puppetry Summit in 2006.

Since 2007, Frank Newman has been the company’s Artistic Director. He does not have a traditional background in puppetry and has radically changed the nature of Terrapin Puppet Theatre by creating characters using digital technology rather than making them from “real” materials. One show, Boats, will be seen in the United States and another, When the Pictures Came, was created with the Children’s Art Theatre of China.