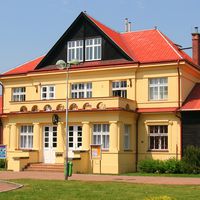 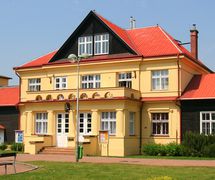 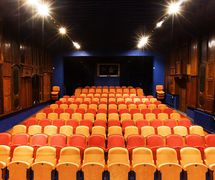 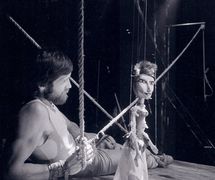 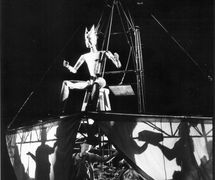 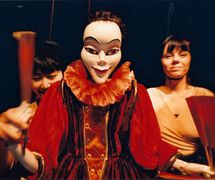 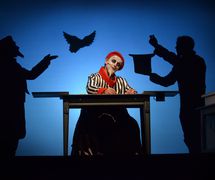 Czech puppet theatre founded in Hradec Králové (Eastern Bohemia) in 1958. The original name of this well-known theatre was Východočeské loutkové divadlo (Puppet Theatre of Eastern Bohemia). “DRAK” is the acronym for “Divadlo rozmanitostí, atrakcí a komedie” (Theatre of Variety, Attractions and Comedy), the name of the theatre since the end of 1968. In the year 1992, the name was simplified to Divadlo DRAK.

The theatre launched its first performance in 1958, approximately ten years after other professional Czech companies. Since its foundation, it has injected new stimuli into the Czech theatre scene. The first creative period was epitomized by its founders, director Vladimír Matoušek and playwright Jiří Středa. However, mainly due to the arrival of famous playwright and dramaturge Jan Dvořák (who became artistic director of the theatre in 1964) and director Miroslav Vildman (who introduced a new theatre style), the theatre’s influence has grown in the estimation of Czech puppeteers. During this period, significant collaborations with set designer Pavel Kalfus and sculptor František Vítek began. DRAK was also committed to reviving the tradition of the old Czech marionettists and their repertoire. This became key to the artistic style of the theatre.

DRAK had its first major success with Pohádka z kufru (Fairy Tale from a Suitcase, 1964) by Jan Vladislav. The theatre also recorded its first international success in 1966 at the Munich Puppet Theatre Festival thanks to this production. In 1971, Miroslav Vildman left the company and was replaced by director Josef Krofta whose name was thereafter associated with the theatre. The coherence of Krofta’s artistic choices and the inventiveness of his dramaturgy were key to the growth of the company’s subsequent reputation. Over the decades, Krofta’s artistic vision was assiduously maintained by the company’s team of Jan Dvořák, Miloslav Klíma, Josef Krofta, Petr Matásek, and by the composer and actor Jiří Vyšohlíd. In the mid 1990s, the theatre underwent a major transformation when Krofta’s son Jakub came to the company as a director together with set designer Marek Zákostelecký. DRAK’s repertoire has always drawn deeply from Czech traditions of comedy and incorporated the most modern staging methods, primarily in the confrontation between the puppet and the actor.

Together with Divadlo Spejbla a Hurvínka (Spejbl and Hurvínek Theatre), DRAK is one of the most recognized Czech theatres in the country as well as abroad. It has made guest appearances in Europe, the United States and Asia. Krofta also engaged the company in several international projects, including Královna Dagmar (Queen Dagmar, 1988), Babylonská věž (The Tower of Babel, 1993), and Korálky z Polárky (Beads of the North Star, 1996).