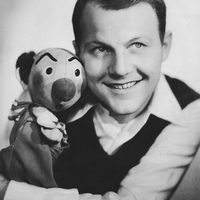 American puppeteer. Burr Tillstrom was the first puppeteer to reach millions of American television viewers with shows that were witty, charming, and sophisticated enough to appeal to adults as well as children. In 1976, his puppet character Kukla was named “America’s Punch”.

Burr Tillstrom made his first marionettes following Edith Flack Ackley’s pattern in her work, Marionettes: Easy to Make! Fun to Use! (1930). He was inspired by the Tatterman Marionettes, and encouraged by a neighbour, the sister of Tony Sarg. Rufus Rose became a mentor in 1933. Burr Tillstrom’s first puppet job was with the government sponsored WPA (Work Progress Administration, renamed in 1939 Work Projects Administration, New Deal agency employing millions during the Great Depression). Under the direction of Don Vestal, Burr Tillstrom performed a play by Gertrude Stein at the first American puppet festival in Detroit in 1936. His new hand puppet (glove puppet) was given the Russian name Kukla (“puppet” in Russian) by ballerina Tamara Toumanova.

Burr Tillstrom appeared at the 1939 World’s Fair in New York. In 1941, he did pioneering television work. In 1947, Fran Allison was invited to do a television show with Burr Tillstrom. Fran stood in front of the puppet stage talking to her puppet friends: Kukla, the leader of the troupe, Ollie, or Oliver J. Dragon, a one-toothed dragon, Madame Ooglepuss, an opera diva, Buelah Witch, Fletcher Rabbit, Cecil Bill, Colonel Crackie, Dolores Dragon, and other friends. Kukla, Fran, and Ollie first aired on local broadcasts in 1947, and was broadcast nationally from 1948 to 1957.

In 1970-1971, Kukla and Ollie appeared on public television with twenty-six new half-hour episodes in colour. The show won two Emmys and the prestigious Peabody Award. There were hundreds of guest appearances.

In 1960, Kukla and Ollie covered the political conventions for The Today Show.  Television specials included St. George and the Dragon (1953), Many Moons (from James Thurber, 1954), The Reluctant Dragon (1968). Burr Tillstrom made several recordings and wrote a children’s book, but mostly he resisted commercial offers. In 1964, he did guest spots on an adult satire show, That Was the Week That Was. His powerful hand ballet, The Berlin Wall (1965), created for the show won great recognition (see Bare Hand Puppetry). Jim Henson and Shari Lewis always acknowledged the enormous influence that Burr Tillstrom had on their work. In 1980, he appeared at the gala opening of the Washington, DC UNIMA 13th World Puppetry Festival.

Although most famous as a television star, Burr Tillstrom loved live performance. He appeared at eleven national festivals from 1936 to 1984. Ollie made his New York theatre debut in 1953. The Kuklapolitans played Broadway in 1960 and again in 1978 in Side By Side by Sondheim (a homage to the author-composer, Stephen Sondheim). The Chicago Historical Society (1601 N Clark St. Chicago, IL 60614 www.chicagohistory.org) is the home of the Burr Tillstrom archives.

Burr Tillstrom worked as a solo performer. His hand (glove) puppets were always simple and his sets and props were minimal. With a dozen whimsical eccentric puppets, he improvised hundreds of hours of television. His work was distinguished by the depth and subtlety of his characterizations, his sly comments on modern life and culture, and a caring warmth and humanity. His gifts included superb timing and a beautiful way with a song. To young puppeteers he offered this advice: “Read! Write! See as many performing arts as you can. Begin to understand characterization, and motivation and emotion. What is it that moves you? Touches you in some way? What delights you? What makes you mad? Take time to understand relationships, then go ahead and reach for the stars.”