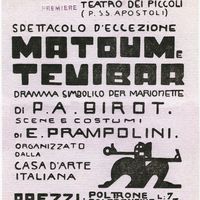 Italian painter and stage-designer. Enrico Prampolini’s first sketches of scenery, which were never executed, date from 1914 and were intended for the Teatro dei Piccoli of Vittorio Podrecca. Only five years later did he apply to the puppet stage some of the principles he had developed in his “Manifesto della scenografia futurista” (“Manifesto of Futurist Scenography”, 1915), conceiving scenery and puppets for the production of Matoum e Tévibar (Matoum and Tévibar, 1919) by Pierre Albert-Birot, once more in Podrecca’s theatre. The “luminous architecture” that he created on this occasion was a free combination of basic geometric forms which allowed him to link the characters and the scenic space into a complete plastic unity in motion and create a richly coloured imaginary universe.

After this production, Enrico Prampolini created several more projects for puppets. Those intended for Podrecca were never realized; however, Les Scaphandriers nocturnes (The Nocturnal Divers) by Luciano Folgore and Massimo Bontempelli were performed in 1923 at the Cabaret del Diavolo (Devil’s Cabaret), a pub opened by Gino Gori in Rome.

As the posters show, Prampolini encountered the puppet on his way towards what remains his true utopia, the creation of dynamic scenography which would be a show in itself. This project led him more specifically towards the construction of the model of a Teatro Magnetico (Magnetic Theatre), which was exhibited in Paris in 1925. With his dream of “costumes making engine noises” for mechanized dancers or of “gas actors” moving about and sputtering under glass bells he was one of the first to imagine an abstract theatre in which the narrative content would be taken over entirely by light, volumes and sounds.

In Paris in 1927-1928, together with Maria Ricotti, he organized performances of the Teatro della Pantomima Futurista (Futurist Pantomime Theatre), which mixed live actors and their doubles in the form of animated figures.