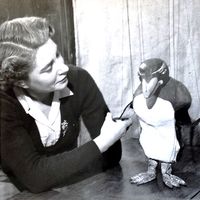 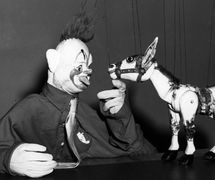 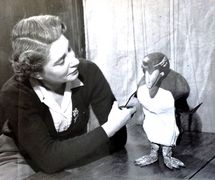 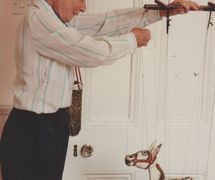 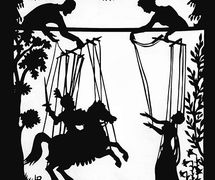 British puppet theatre company founded in 1932 in London by Jan Bussell and Ann Hogarth (1910-1993). Ann Hogarth was trained as a stage manager at the Royal Academy of Dramatic Art (RADA). Jan Bussell was an actor and television producer already involved in puppetry when the two met and, looking for new initiatives in puppet theatre, worked together as full-time puppeteers. Their repertoire, for adults and children, mixed different techniques of puppetry in an adventurous range of pieces: literary dramas, children’s tales, poetry and songs, music hall and circus turns. The couple experimented with artistic concepts, notably in a cubist Macbeth with scenography by Michael Eve.

The Hogarth Puppets became Britain’s best-known company at home and abroad. At first the Bussell-Hogarth couple worked on the introduction of puppetry to television, their shows appearing live on Saturday evenings during the 1930s from a caravan theatre outside the BBC headquarters. They produced one-act plays including Fly by Night, based on a Boccaccio story. During World War II, the London County Council commissioned them to entertain children in London parks, and this part of their work continued well after the war.

Their most famous puppet was Muffin the Mule, made by Fred Tickner in 1934, but which enjoyed a long television life of its own in a BBC series which ran from 1946-1954, for which Ann Hogarth operated the marionettes (string puppets) and Annette Mills played the piano on which Muffin and his friends performed. The death of Annette Mills brought the series to an end, but the character of Muffin (that of a mischievous little boy) has passed into television history as part of the national heritage. He continued to appear live in the Hogarth Puppets’ variety shows, in prestigious theatres including London’s West End, with Jan Bussell as narrator and musician and Ann Hogarth as manipulator.

The Hogarth Puppets toured internationally with their string puppets (Australia, Asia, the United States and Europe). Their travels brought them gifts and acquisitions which became the Hogarth Collection, exhibited internationally, and eventually purchased in 1980, thanks to a grant from the National Art Collections Fund, by the Puppet Centre Trust.