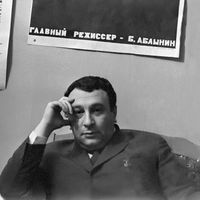 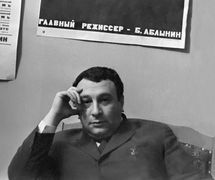 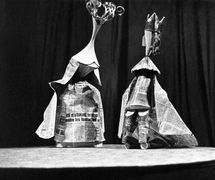 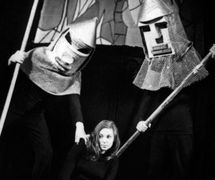 Russian puppet theatre director, active in the 1960s and 1970s, representative of what is known as the “third type theatre” between drama theatre and puppetry. In 1949, Boris Ablynin graduated from the Teatralnoye uchilische imeni Borisa Shchukina (Boris Shchukin Theatre School) in Moscow, then worked as a director in the Latvian Puppet Theatre in Riga from 1954 to 1956, and later in the Sergei Obraztsov State Central Puppet Theatre (see Gosudarstvenny akademichesky tsentralny teatr kukol imeni S.V. Obraztsova) from 1956 to 1963, acting also as principal director of the Moskovsky gorodskoi teatr kukol (Moscow Puppet Theatre) and the artistic leader of the theatre’s student studio from 1956 to 1967. In 1968, he created Zhavoronok (The Lark) theatre that existed until 1972. From 1976 to 1988, Boris Ablynin transferred his focus to cinema and worked as a director at the Soyuzmultfilm animation studio.

However, Ablynin’s best-known production was Zhavoronok (The Lark) by Jean Anouilh (Moscow Puppet Theatre, 1966), which he co-staged with designers Natalia Kapranova, Aleksandr Sinetsky, director Grigori Zalkind, and Nina Shmelkova in the role of Joan of Arc. In this production, Ablynin was one of the first directors to stand up against the unwritten law of “the unity of the method” imposed by “socialist realism”. Under this pressure, the puppet had to be a precise copy of a human being while the props and sets had to be similar to those applicable in the “human” theatre.

In his production of The Lark Ablynin rejected the standard folding screen and relied instead on the Brechtian Verfremdung or “alienation” effect, a principle of using innovative techniques to “make the familiar strange”: in The Lark revealing the open stage and contrasting small puppets made of newspaper and enormous masks with live actors. The Lark was an avant-garde production, both artistically and politically, marking Boris Ablynin’s creative achievement as a courageous experiment that would influence the work of the younger generation of puppeteers in the late 1970s and early 1980s.