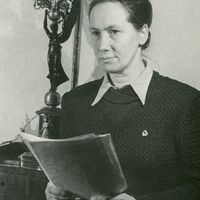 Lenora Shpet, daughter of the Russian philosopher Gustav Shpet (1879-1937), studied at the Social Science Department of the Moscow State University (1921-1924). From 1929 to 1938, she was head of the Theatre Department at the Moscow Tsentralny dom khudozhestvennogo vospitaniya detei (Central House of Art Education for Children). A puppet company was established at the House on her initiative, and she invited Sergei Obraztsov to lead the company. Lenora Shpet did much to promote the company’s young talent, contributing greatly to the shaping of its repertoire. When the company was given the status of a State theatre, Lenora Shpet became its literary department chief.  Her extensive connections in the literary world helped her to commission the best playwrights to work for the company. Her vast knowledge of literature, folklore, and drama along with her refined taste and sense of style were all employed in shaping the Sergei Obraztsov State Academic Central Puppet Theatre’s repertoire.

From 1947 to 1960, Lenora Shpet was engaged in a wide range of activities. Along with her duties as staff member of the Obraztsov theatre, she helped establish the Children’s Theatre Department at the Russian Theatre Union, edited plays for the puppet theatre, lectured, and wrote essays on puppetry.

After the UNIMA national centre of the USSR was established under her guidance in 1958, she became its first general secretary. Since 1960, she was a member of the UNIMA International Presidium (later renamed Executive Committee), retaining that position until her death in 1976.