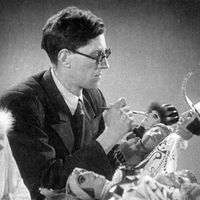 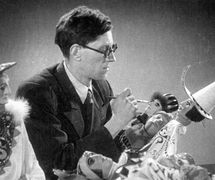 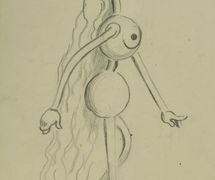 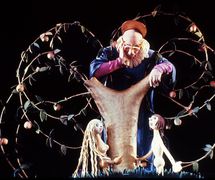 Russian puppet and stage designer. From 1936 to 1970, on the invitation of Lenora Shpet, Boris Tuzlukov was the chief puppet and stage designer at the theatre that would become known as the Gosudarstvenny akademichesky tsentralny teatr kukol imeni S.V. Obraztsova (Sergei Obraztsov State Academic Central Puppet Theatre). He staged more than twenty-five productions for the theatre. His romantic talent helped to increase the importance of the fairy tale in the repertoires designed, respectively, for children and adults and he added his own touches to the comic and satirical tendencies of Sergei Obraztsov.

The most well known of his twenty-five productions for children and adults are Kot v sapogakh (Puss in Boots, 1936), Volshebnaya lampa Aladdina (Aladdin’s Magic Lamp, 1940), Korol olen (The King Stag, 1943), Maugli (Mowgli, 1945), Solomennaya shlyapka (The Straw Hat, 1959), Bozhestvennaya komedia (The Divine Comedy, 1961), I-go-go! (Russian onomatopoeia imitating the neighing of a horse, 1964), Noev kovcheg (Noah’s Ark, 1968). Each of his productions was experimental in one of the areas of the puppet scenography: the arrangement of the stage space, the technology of the puppets, or the stage lighting. A perfectionist, Tuzlukov also participated in the staging, determining the sequential order of the scenes and the overall rhythm of the action.

The dominant position of the Sergei Obraztsov State Academic Central Puppet Theatre in the Soviet State hierarchy provided Tuzlukov a certain freedom of expression, while, paradoxically, canonizing his experiments. Thus, in the 1940s and 1950s, Tuzlukov inadvertently became a model for Soviet puppeteers. However, in imitating him, these puppeteers lacked the freshness and authenticity of the original. For many years, puppetry students had the opportunity to learn from Boris Tuzlukov at special courses set up at the Sergei Obraztsov Central Puppet Theatre.