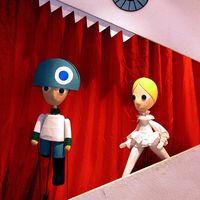 Croatian creator of puppets and scenographer. Branko Stojaković started as a self-taught enthusiast in the theatre company Kazalište lutaka Zadar (Zadar Puppet Theatre), gradually discovering, and then contributing to, various puppet technologies. The distinctive puppetry mode of expression known as the “Zadar puppetry school” came into being, in the most part, thanks to his technological skill and imaginative approach to the creation of puppets, eclectic in style but with a particular creative ebullience in stage and visual effects which, at its heights, produced puppets and scenography of exceptional artistic value. Almost all of his creative life was connected with the Zadar Puppet Theatre, but he also worked in other puppet theatres in Croatia as well as in many theatres throughout the former Yugoslavia; he also tried his hand in television puppet productions.

Branko Stojaković proposed very important postulates of puppetry expression, such as the demand for animation of the entire stage area, being of the opinion that “there are, in fact, no differences between the scenographer and the creator of the puppets. The puppet becomes the stage setting, and the stage setting becomes the puppet …All that exists is the visual treatment of the show …The puppet theatre can no longer be known under this name, but as a theatre of symbols.”