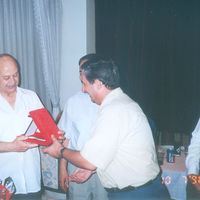 Turkish shadow theatre puppeteer. Tuncay Tanboğa was trained by his grandfather, the famous performer Hayali Küçük Ali (Mehmet Muhittin Sevilen), beginning when he was seven years old. At ten he made his first figures, beginning a collection of more than 700 pieces. In 1951, at fourteen, his grandfather, judging him ready, conferred the title hayali (master). After this honour, he organized a week’s commemoration each December. He became one of the national founders for the International Centre of Puppetry Arts and Shadow Theatre, serving as general secretary and member of the administrative council. Appointed to the faculty of Fine Arts, University of Hacettepe in Ankara, Tuncay Tanboğa taught in the Shadow Theatre section, and directed and shot animated films and shorts. His assistants were his cousin Erdogan Ergüler to 1969, followed by his nephew Nevzat Oktay and, from 1976, his own son Hakan Tanboğa (who became Hayali Torunoglu in 1982) and Haluk Yüce.

A noted international artist, Tuncay Tanboğa made the karagöz shadow theatre known, especially in Germany, Japan, Sweden, the United States, and France (at the Festivals of Charleville-Mézières and Lille, and the UNESCO Mandapa Centre in Paris, FR3).

A Member of Honour of the Union Internationale de la Marionnette (UNIMA), he received many awards for his contributions to the diffusion of karagöz, both at home and abroad. He gave performances at circumcision ceremonies, private and family celebrations, kindergartens and cultural centres, festivals and fairs, for radio and television broadcasts (following here his grandfather’s example). After his retirement (as an engineer in the General Director of Railway’s office in Ankara) in 1979, Tuncay Tanboğa continued to perform at Kukla Kebap Salonu (Kebab Puppet Salon/Hall) in Ankara.