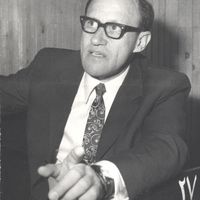 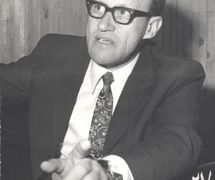 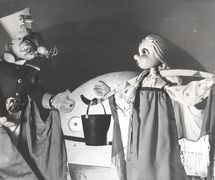 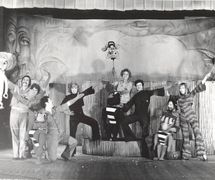 Russian actor, theatre director and playwright. Having graduated from high school in 1940, Yuri Eliseev was drafted just before the beginning of World War II. His first poems and stage scripts were written for amateur army drama groups. Demobilized in 1945, he joined a drama theatre school in Gorky (now Nizhny Novgorod), and graduated in 1947, ahead of time. As an actor at the Gorky Children’s Theatre from 1947 to 1951, he fell in love with puppet theatre. In 1951, he wrote his first play, Rasskaz Ivana Ivanovicha (The Ivan Ivanovich Story); his second play, Dva mastera (The Two Masters), appeared a year later. The latter was staged by many Soviet (as well as Polish and Hungarian) companies.

Since 1953, Yuri Eliseev combined acting and directing at the Gorkovsky teatr kukol (Gorky Puppet Theatre); in 1968 and 1968, he was its artistic director. He regularly wrote new plays and published collections of poems and short stories. He also made an animated film, Sluchai s khudozhnikom (An Incident with a Painter), and a documentary, Zdravstvuite, loshad! (Hello, Horse!). During those years, he also took seminars/workshops with Sergei Obraztsov.

In 1969, Yuri Eliseev became artistic director of the Leningrad-based Teatr Skazki (Sankt-Peterburgsky gosudarstvenny kukolny teatr skazki Saint Petersburg State Puppet Theatre of the Fairy Tale). His premieres – Tsarevna lyagushka (The Frog Princess), Alyonushka i soldat (Alyonushka and the Soldier), Tigrik Petrik (Petrik the Tiger Cub), the children’s opera Ai da Balda! (That Nice Fellow Balda!) – were all well received. The company toured Moscow and abroad, receiving laudatory press reviews. Plans for completing a new theatre building were also in place. In November 1986, Teatr Skazki moved to its own building, regrettably after Eliseev had had to retire from theatre due to ill health.

As a director, Yuri Eliseev emphasized irony and the grotesque, particularly in his visual imagery. As a playwright, he drew upon the wealth of the Russian language in portraying his acute and witty observations of society, notably with Nerazmenny rubl (The Unchangeable Rouble, 1971), a collection of fairy-tale plays.