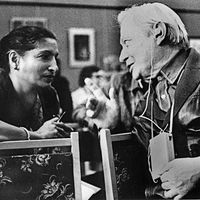 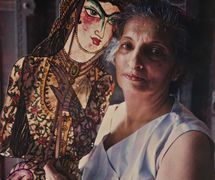 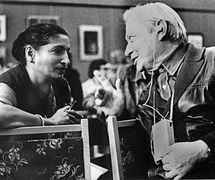 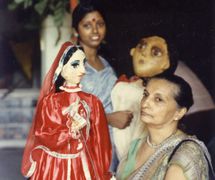 Indian puppeteer, director, artist, teacher, and author of books on puppetry. Meher Contractor (known as Meherbehn) was a major figure in Indian puppetry arts, recognized as much for her creative work (an abstract style as opposed to the epic realism influenced by Sergei Obraztsov then adopted in India) as for her contribution to the development of puppetry in education. Trained in London, Meher Contractor was a painter, book illustrator, and a fashion designer before turning her hand to puppetry in 1952. In 1958, she undertook a study tour to various schools in Czechoslovakia where puppetry was used in education. In the same year, she participated in and represented India at the 6th UNIMA Congress and 1st International Festival of Puppet Theatres held in Bucharest, where Marjorie Batchelder McPharlin (United States) encouraged her to continue in her chosen field.

Meher Contractor became a teacher of the plastic arts at the Shreyas Foundation School in Ahmedabad, Gujarat, where she began using the puppet figure for educational purposes. She taught children how to make puppets with all kinds of materials (shoes, boxes, paper bags and other waste materials) that could easily be manipulated and worked with by the children. She headed the puppetry section at the Darpana Academy of Performing Arts in Ahmedabad, where she trained a number of contemporary Indian puppeteers, including Shri Mahipat Kavi, Bela Shodhan, Mansingh Zala, from Ahmedabad, Dadi Pudumjee, from Delhi, and Ratnamala Nori, from Hyderabad. In addition to her contribution as a pedagogue, she made her mark with her work with shadow theatre in the Andhra Pradesh style (tolu bommalata), in her productions Ramayana and Shah-Nama (The Book of Kings), as well as with her rod puppet creations.

In her book, Various Types of Traditional Puppets of India (1968), Meher Contractor brought together important documents on the various traditions of Indian rod, string, and glove puppets and shadow theatres of India. She is also the author of works on puppetry and education (Creative Drama in Education, 1984).

Very active in UNIMA, in which she set up the Indian chapter, UNIMA India, in 1985, and the Asia-Pacific Commission, Meher Contractor played a key role in the cultural exposure of the puppetry arts both in her own country and abroad. In 1983, Meher Rustom Contractor was given the prestigious Sangeet Natak Akademi Award for her contribution to Puppetry. She was nominated UNIMA Member of Honour in 1992 at the UNIMA Congress in Ljubljana, Slovenia.