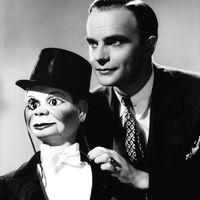 American ventriloquist. Edgar Bergen was born Edgar John Berggren in Chicago to parents of Swedish descent. Like many budding entertainers of his day, he taught himself his craft as a young child through diligent practise and performances at local neighbourhood functions. He drew his own sketches of a local newsboy character that he named Charlie McCarthy. He purchased a stock ventriloquist figure similar to his sketches of Charlie for $35 in 1922 from the local woodworking shop of Theo Mack & Sons which specialized in providing wooden ventriloquist “dummies” to professional performers.

Edgar Bergen began appearing on vaudeville circuits throughout the United States. In 1936, he appeared at a private party in honour of the internationally acclaimed songwriter Noel Coward at the legendary Rainbow Room in New York City. For this engagement the puppet Charlie was dressed in top hat, tails, and a monocle to add an air of sophistication. Spellbound audience members included executives from the world of radio who instantly booked him for a programme. On May 9, 1937, the Chase and Sanborn Hour, starring Edgar Bergen, also known as The Charlie McCarthy Show, debuted nationally and became an instant hit. Charlie’s snappy high-pitched comic retorts were in sharp contrast to the more solemn and staid Bergen’s bass tones. Bergen added other characters to his repertoire for additional comedy. These included Mortimer Snerd, a country bumpkin character crafted by Virginia Austin Curtis (1903-1986) in 1936, and Effie Klinker, a sassy old maid built in 1944.

Edgar Bergen was the quintessential ventriloquist of the 20th century in America. Bergen, with his wooden sidekick, Charlie McCarthy, rose to national stature rising above the ranks of other vaudeville novelty acts by becoming hugely popular in the unlikely medium of radio. As a brilliant comedy writer, Bergen created in the persona of Charlie McCarthy a veritable “everyboy” that captured the imagination of audiences of every age range. Bergen and McCarthy also became headline performers in motion pictures during the golden age of Hollywood (see Cinema).

As a performer accustomed to working in a radio studio, Bergen got into the habit of compromising his once flawless “lip control” for the sake of good broadcast diction. Thus by the time television took over as the central entertainment media in the 1950s, Bergen’s technical skill as a ventriloquist had waned. However, the strong comedic characters of Charlie, Mortimer, and Effie remained popular throughout Bergen’s lifetime.

Edgar Bergen appeared in numerous motion pictures including: You Can’t Cheat an Honest Man (directed by George Marshall, also starring W.C. Fields, 1939), and Charlie McCarthy Detective (directed by Frank Tuttle, 1939). He won many awards including a special wooden Oscar with a slotted moveable mouth in 1938. Edgar Bergen died in 1978 during a series of live performances at a Las Vegas casino where he had just announced his impending retirement. The famed international actress Candice Bergen (b.1946) authored a book, Knock on Wood (1984), that included her reminiscences about growing up with her puppet brother, Charlie McCarthy. Edgar Bergen, himself, is the author of How to Become a Ventriloquist (1938).

Charlie McCarthy is now part of the permanent puppet collection of the Smithsonian Institution in Washington, DC.