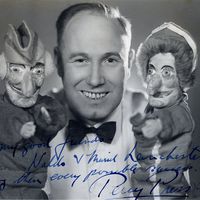 British Punch and Judy performer and showman. Percy Press’s long journey from humble beginnings to becoming “the uncrowned King of Punch and Judy” began with a penny book of magic purchased at the age of twelve. He was a child actor with Lew Lake and Ted Hurley in music hall and at seventeen became a street magician, having made his debut on Hampstead Heath. As a busking magician and fairground player he toured throughout Great Britain. He began to perform Punch and Judy in earnest in 1935. Seasons at Swanage, Ramsgate, Paignton, Herne Bay and Hastings consolidated his reputation.

During World War II Percy Press presented Punch in Battledress for ENSA (the Entertainments National Services Association), which organized travelling entertainment for civilians and troops during the war years. In 1947, he performed in Punch and Judy for Renown Films and, in 1962, The Punch and Judy Man, starring Tony Hancock, followed. Further films included Oliver (1968), Success Story (BBC, 1975), and Punch and Judy (Arts Council 1980) which featured his last performance.

Percy Press became Chair of the British Puppet and Model Theatre Guild in 1950. In 1951, he featured in the Festival of Britain, having appeared in almost every setting from the Mansion House to prison. He toured with his Punch and Judy show to France, Monaco, Germany and Japan.
Constant exposure to the public of the streets developed Press’s showmanship, wit and savoir faire. His delicate manipulation and timing surpassed his peers and inspired others. He was the father of two Punch “Professors”: Percy Press II and Leslie Press. He died in 1980, and has a permanent memorial plaque in St Paul’s Church, Covent Garden, London.